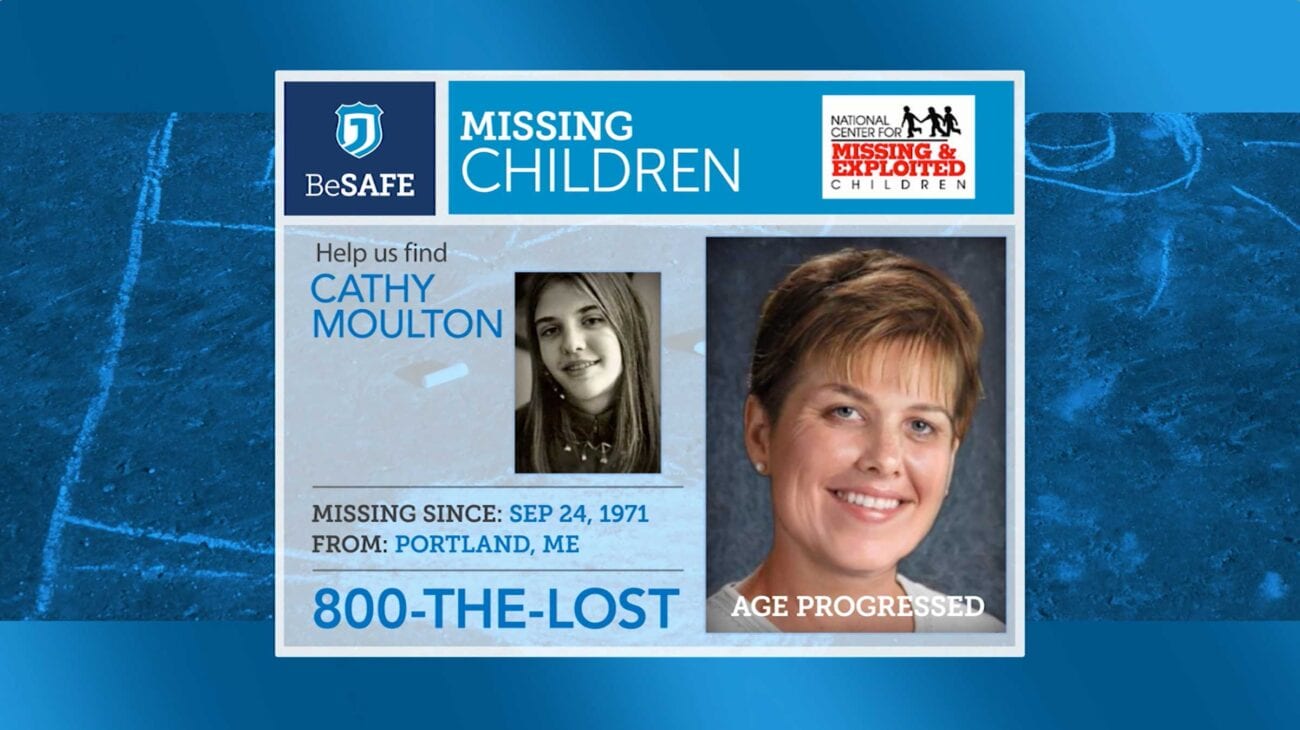 The cold case of Cathy Moulton: The oldest unsolved true crime in Maine

Rural New England has made a habit of appearing in TV & film as a favorite site for murder mysteries & eerie tales. Tied to the very inception of the American horror genre,  these roots are buried as far back as the 19th century.

States like Maine are no exception. The mysterious reputations of some of its quaint, isolated towns have even helped to craft bestselling novels by some of their resident writers. After all, where else would you expect to find the Stephen Kings of the world?

Sadly some of these horrors spill into our reality, leaving the nation & authorities baffled by gruesome murders & aptly named “cold case” files. One such circumstance still hasn’t faded into memory despite its reputation as the oldest unsolved missing persons case in Maine’s history. 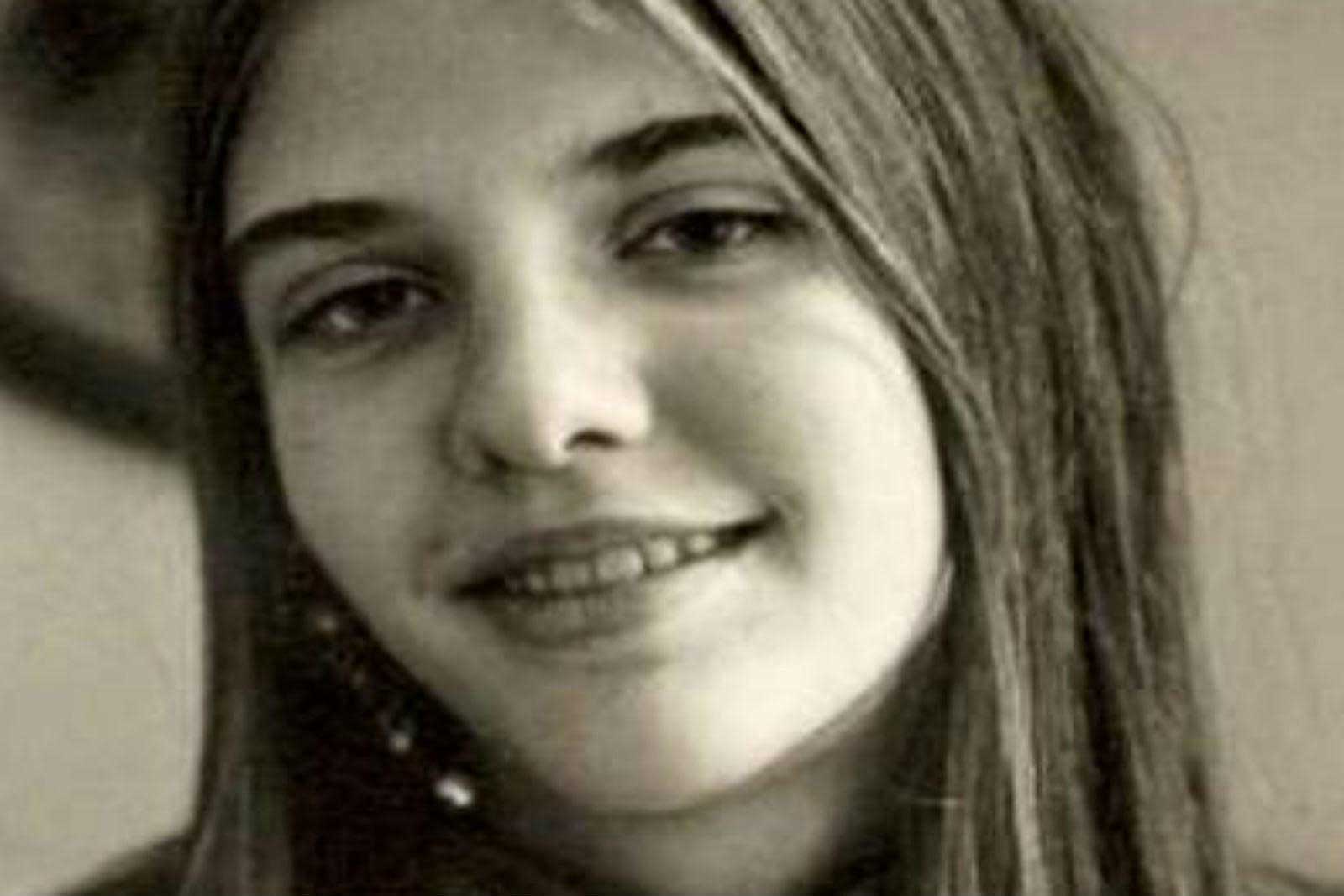 Cathy Moulton was born in Portland, Maine in 1955. She was the oldest of three siblings and lived with her parents Claire & Lyman Moulton.

Cathy was often described by her parents & friends as an intelligent & caring young girl – she was known to provide care & company for local residents and enjoyed writing poetry in her spare time. Cathy also had a love for dancing & attending dances, swept away by the music and attitudes prevalent in the 1960s & 70s.

At the age of sixteen, Cathy Moulton attended Deering High School in Portland, only a brief walk down the street from her house. During the summer of 1971, Cathy’s parents took her on an 81-day trip touring the US and Mexico; it was Cathy’s first real experience outside her home state of Maine. 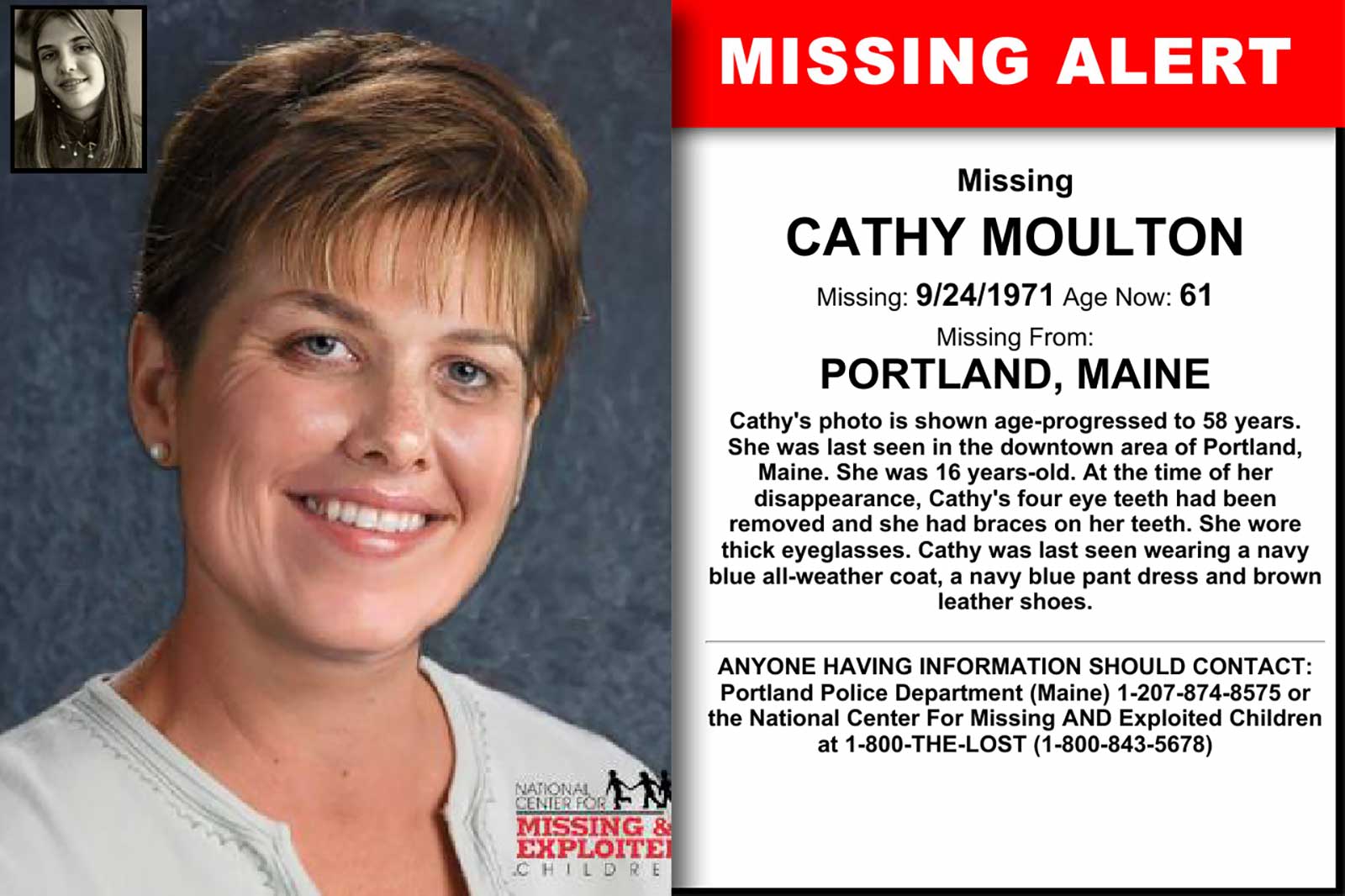 Later that same year, September 24, 1971 would mark the last day that Cathy Moulton was seen – at least by anyone in Portland, Maine. 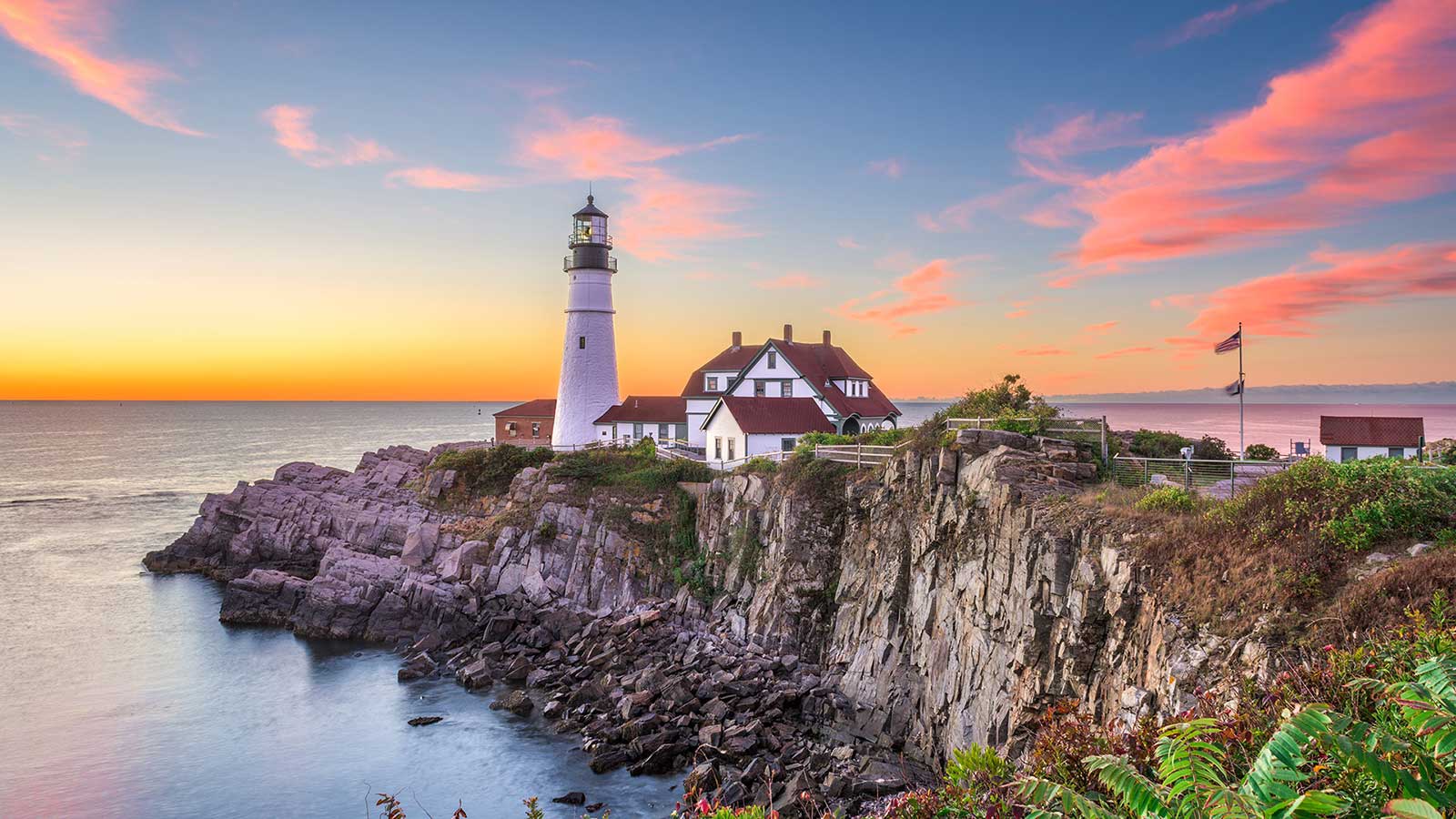 The evening of September 24, 1971 combined a series of events that deterred Cathy from the course of fun to one of assumed tragedy.

That evening a dance was being held by the local YWCA. Cathy had planned on a night of excitement – so much so, that she spent the early afternoon crafting her own outfit to wear. In need of a new pair of tights to tie the look together, she asked her mother Claire for some money.

Claire Moulton obliged her daughter and provided her the much needed funds, but not without requesting that Cathy use some of the money to buy two tubes of toothpaste and return home before the dance.

Cathy’s father Lyman dropped her off in the center of town. Cathy reportedly purchased the toothpaste as asked and proceeded to meet her friend Carol Starbird at another popular hangout spot, Starbird Music Store. Cathy Moulton left the store at 5:30pm hoping to return home with time to spare. She was seen leaving for the mile-and-a-half walk home; that is where all certainty ends. 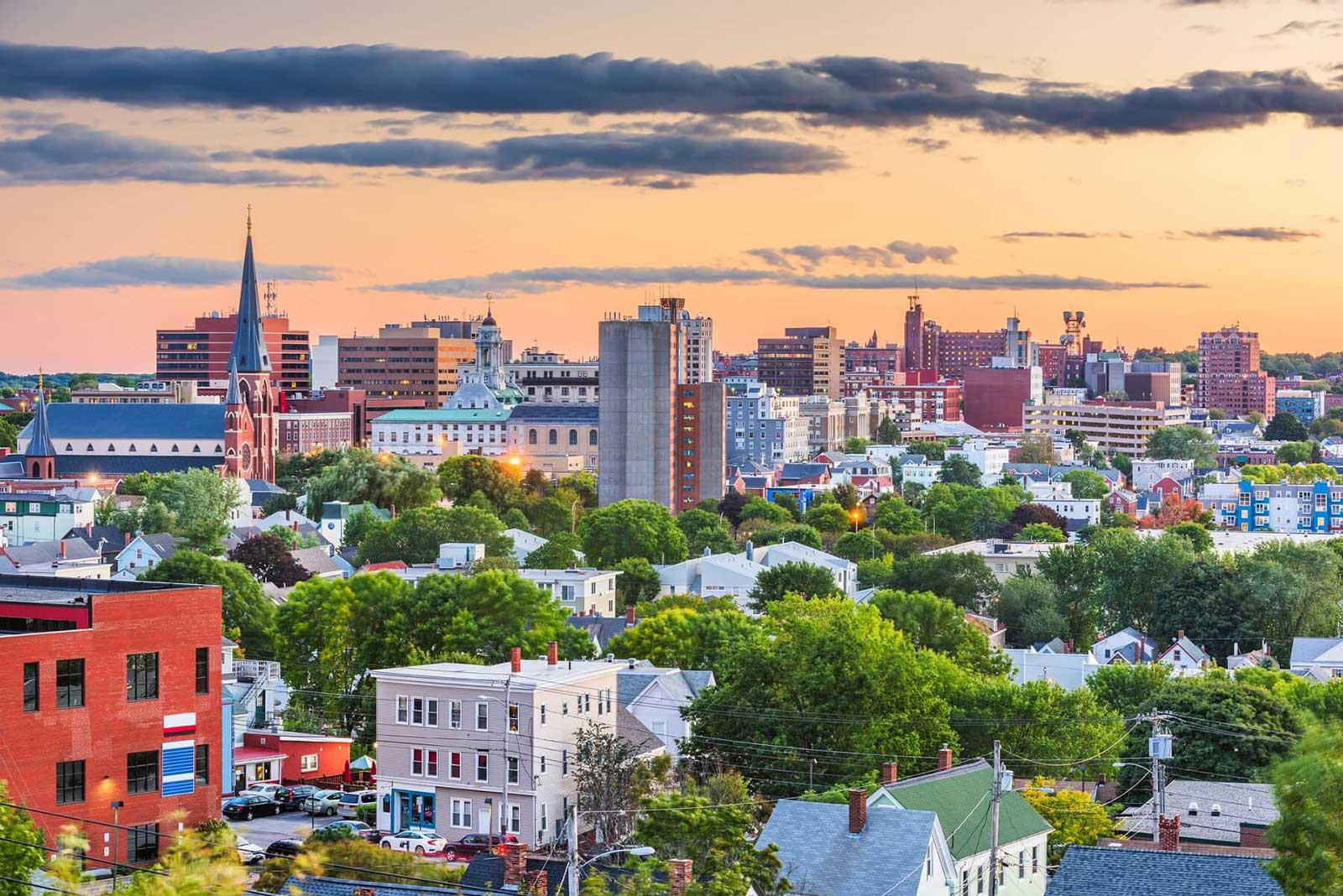 Cathy Moulton: A face to remember

Following the eve of Cathy’s disappearance, her parents reported the incident to the Portland Police. The police insisted on waiting the standard seventy-two hours, but Lyman Moulton’s persistence expedited the opening of a missing persons case.

Lyman also approached the FBI office in Portland in the early days of Cathy’s disappearance. They initially shrugged the matter off as a classic case of a teenage runaway, and neither party had evidence to suggest otherwise.

It took ten days following Cathy’s disappearance to prompt action in the media. The case received coverage from the only two newspapers in Portland and notices were run by the FBI during a popular television series named The F.B.I.

When the word got out, a trickle of information was presented by the residents of Portland. Some was hearsay & some was theory or speculation (or both) – but very little helped to yield results. 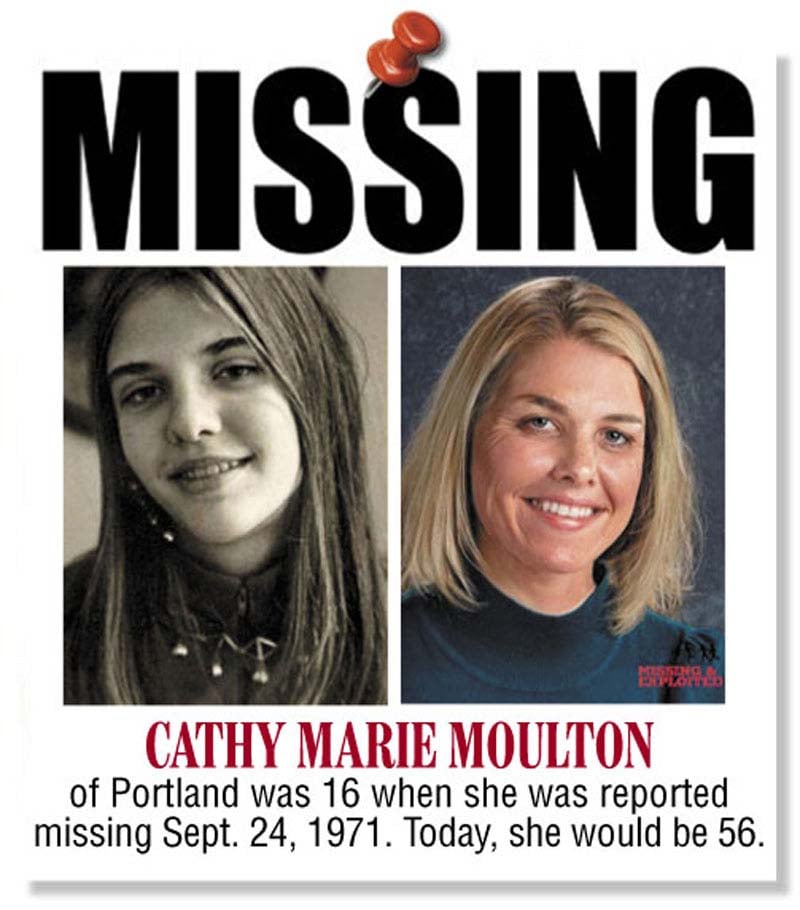 Where in the country was Cathy Moulton?

Police and Cathy’s parents chased leads across the state of Maine. Several reports came in that a girl who looked like Cathy was last seen in a strange car with a boy – sometimes one, sometimes two – in Portland that evening. A similar report came from Presque Isle, Maine, located hundreds of miles north of Portland by the Canadian border.

This search was a dead end, but coincidentally led authorities to rescue another missing girl from Connecticut. Cathy’s classmates even suggested she may have run away to Boston after hearing about the city from a friend. Others suggested she may have ran off with a boy she loved. With no evidence uncovered, the case was closed.

Lyman Moulton was reported to have said in an interview that “[Cathy] trusted people”, while mother Claire was quoted acknowledging the way her daughter “seemed to [enjoy] helping people”. Could this sense of kindness have led to Cathy’s disappearance? Does no good deed truly go unpunished? 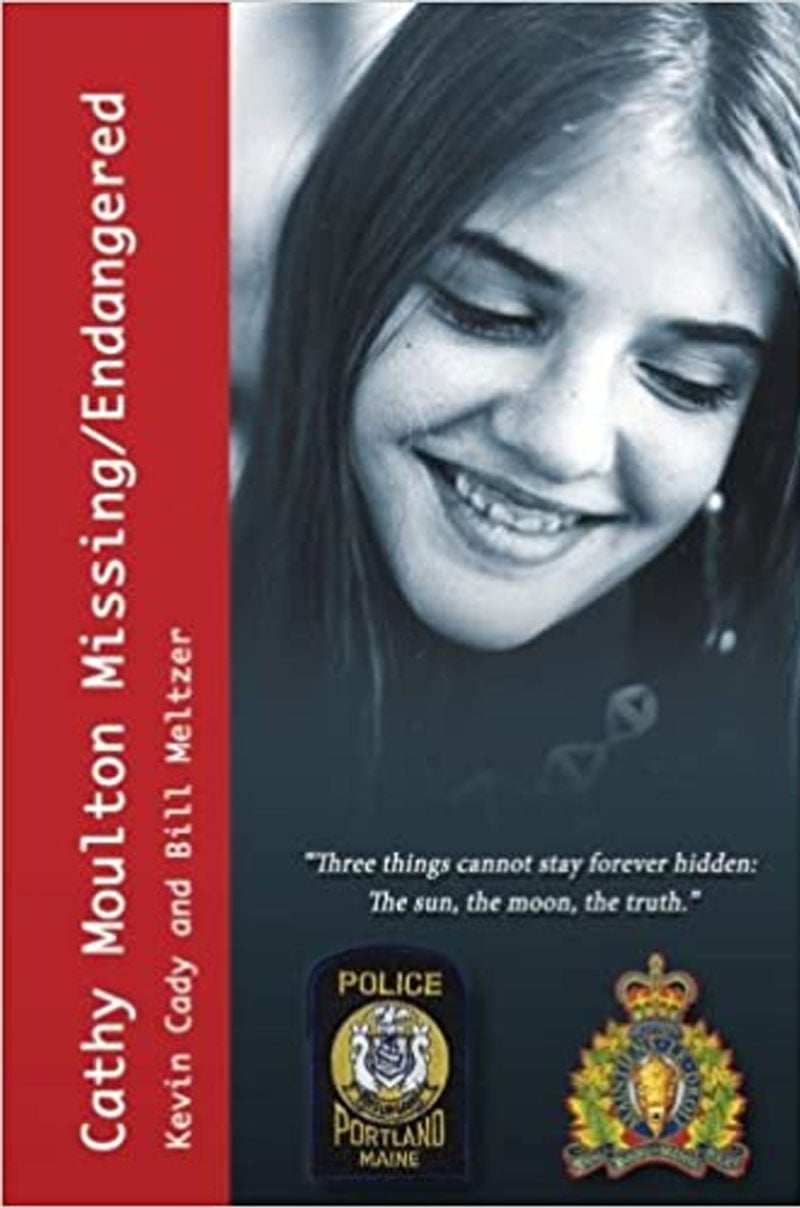 Despite the lack of evidence, Cathy Moulton’s case was reopened in 1983 when a hunter claimed to come across human remains with the clothes of a young woman in the woods near Smyrna, Maine. After he contacted authorities, they were unable to retrace his steps to find the alleged site of the skeleton.

Police departments believe Cathy may have ended up with people from the Smyrna area of northern Maine and been dropped off there in 1971. They speculated that she may have even ended up in the company of people from northern Maine or as far as Canada – but the case was closed again shortly thereafter.

Fifteen years passed before the unsolved case of Cathy Moulton was again opened in 2004. Portland police collaborated with the Maine State Police Department. They again interviewed the hunter from 1983, and this time brought canine teams to search the area. They were joined by Cathy’s sister, Kimberley. Sadly, the result was the same. 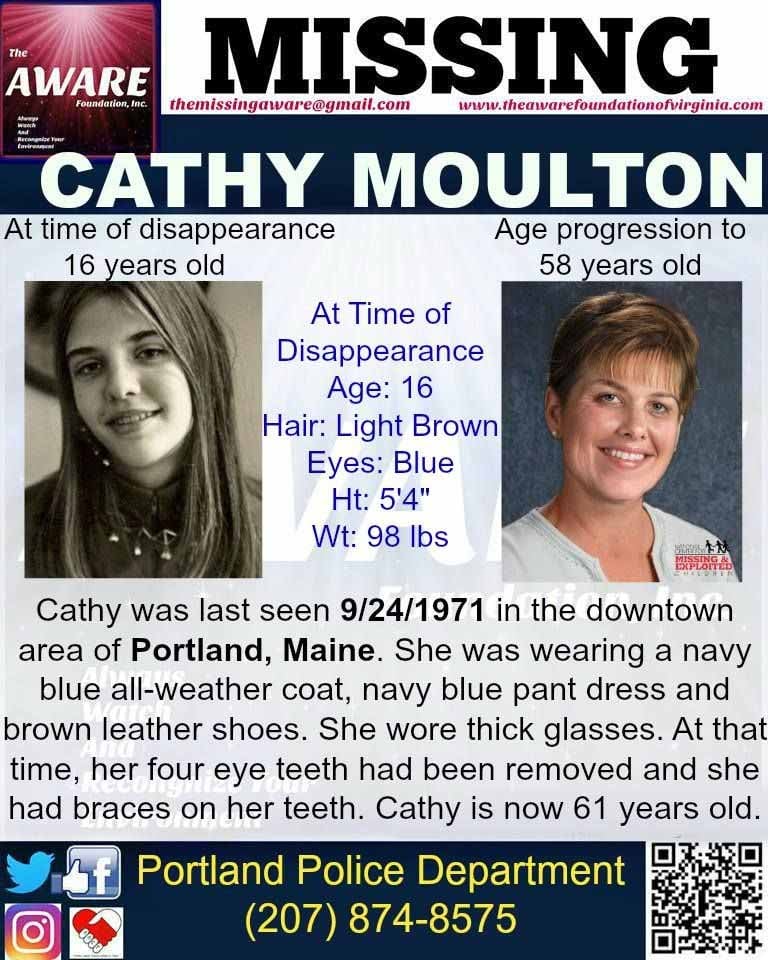 In 1986, a writer named Grantland Rice published a piece in the Portland Monthly declaring the “most ironic aspect” in Cathy Moulton’s case was that “life was just seemingly opening up” for her. He wrote this as a response to her lengthy vacation in the summer of 1971. Had Cathy just realized her sense of adventure and craved more?

Many theories of Cathy’s disappearance have persisted: she was abducted by two boys, or one boy, or that she was killed & abducted in the forest of Smyrna, Maine. Although Cathy Moulton’s father Lyman died recently in 2017, her mother remains at their house in Portland, Maine. The family never changed their phone number and were often cited as keeping their door unlocked to welcome the return of their missing daughter.

To this day the FBI and Maine Police still keep Cathy Moulton’s file open, hoping that someone, somewhere, will come forward with new information. Hopefully some day a theory will lead the Moulton family to justice for their daughter. But nearly fifty years after her disappearance, a growing city in Maine is still seeking answers on one of its own. 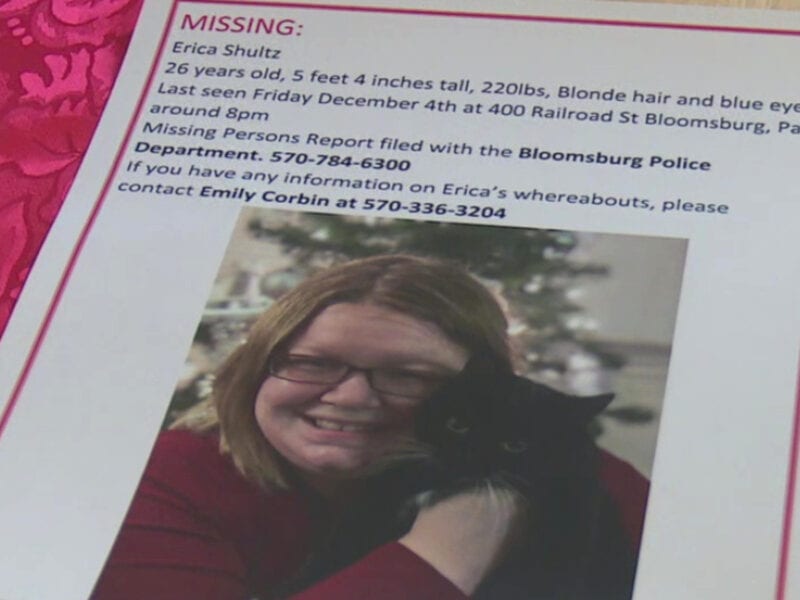