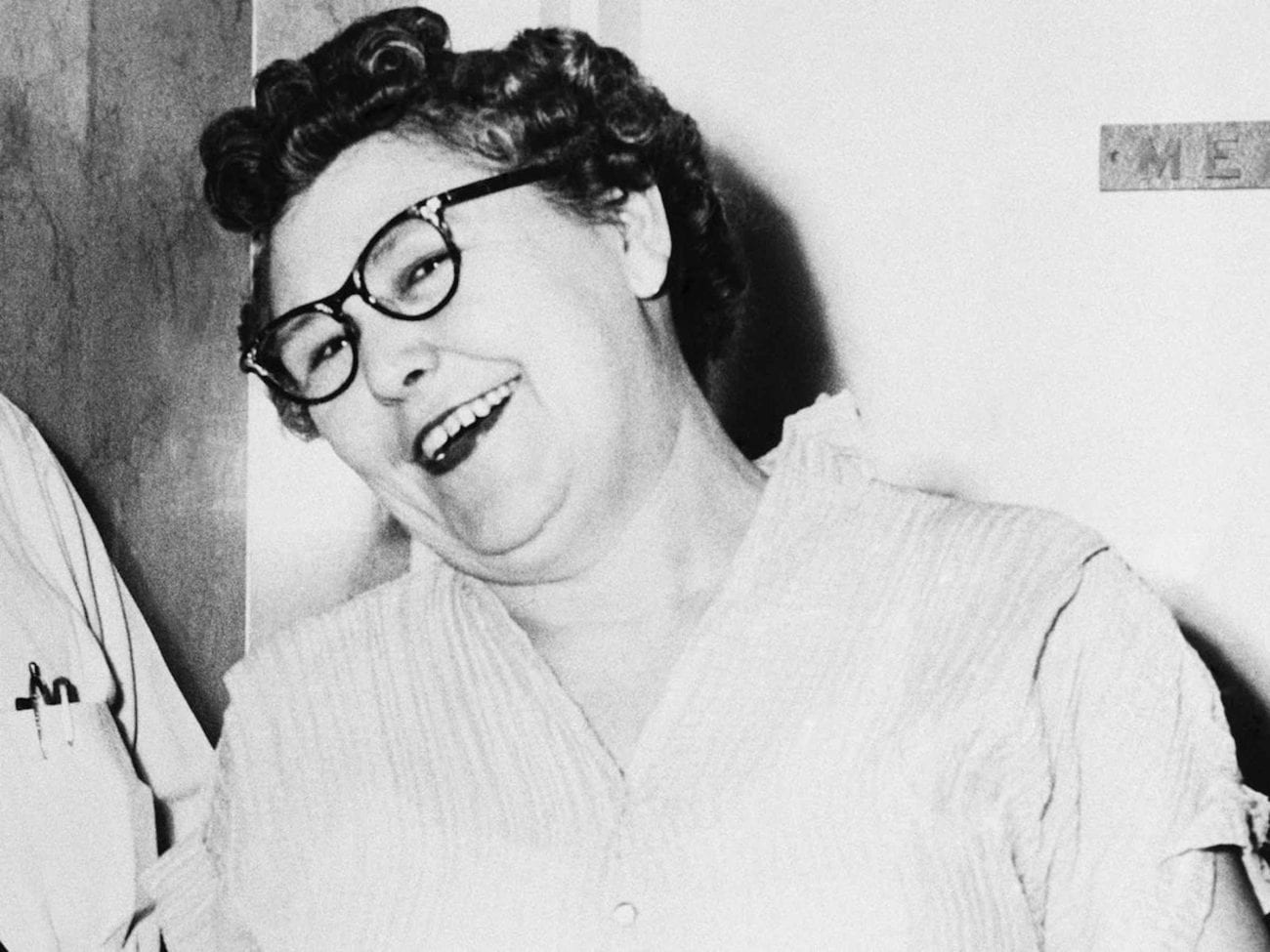 On the surface, Nannie Doss seemed to live a jovial life. She was friendly and laughed all the time. She married, had four children, and in the search for the perfect romance, murdered four—possibly five—of her husbands.

Nannie Doss was a serial killer in the first half of the 20th century who earned the monikers “The Giggling Nanny,” and “The Jolly Black Widow” after a killing spree that began in the 1920s and ended in 1954. Doss’ favorite hobbies included serialized romance magazines and poisoning relatives. 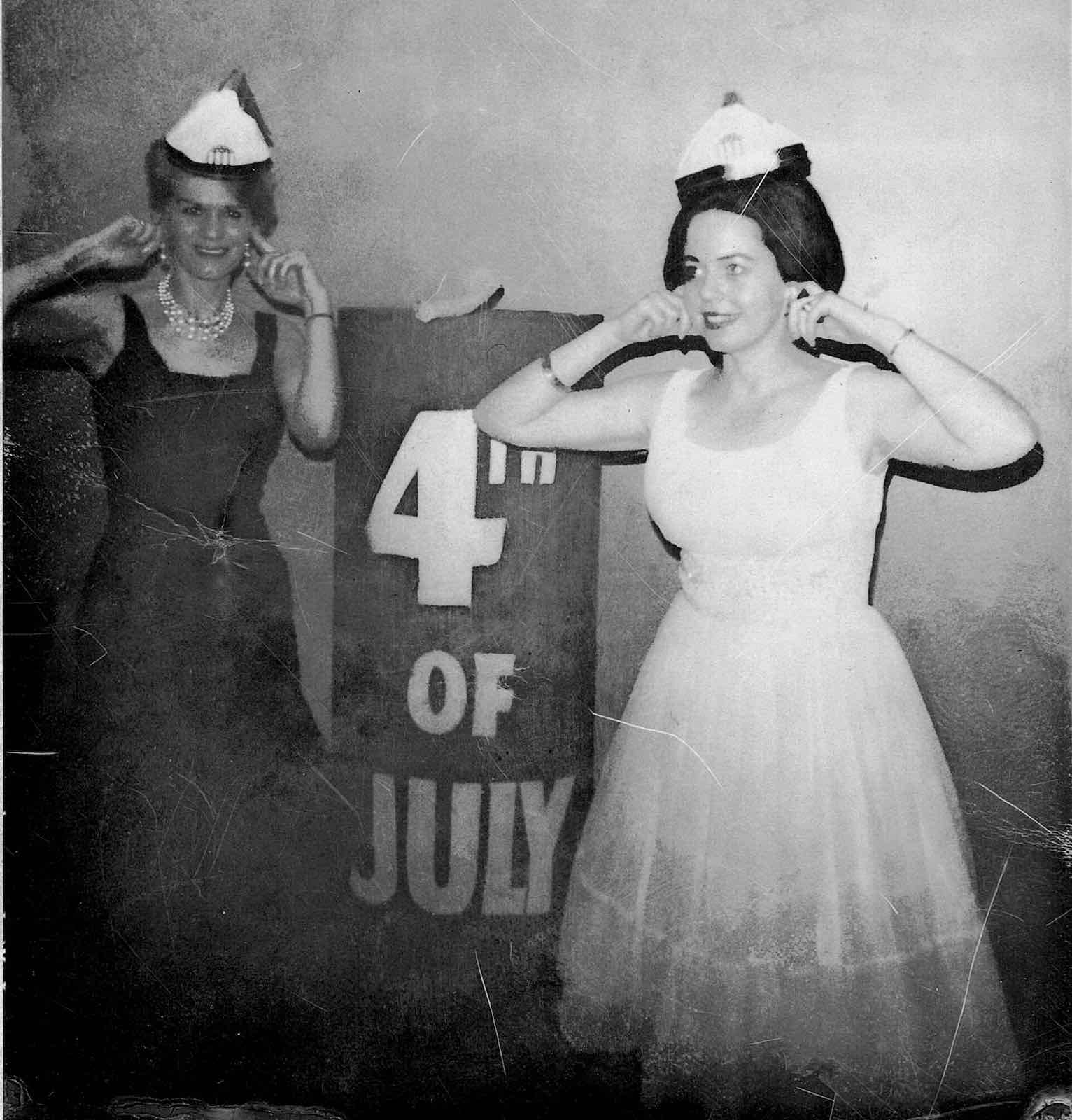 Nannie Doss was born Nancy Hazle on November 4, 1905, in Blue Mountain, Alabama, to a family of farmers. Her parents James and Lou Hazle opted to have their five children stay home and work on household chores and tend to the farm rather than attend school.

Much of Nannie’s childhood was spent avoiding the wrath of her father, who ruled over the family with an iron fist. And since education was a low priority, there were no objections when Nannie decided to leave school for good after completing the sixth grade.

At the age of seven, Doss sustained a head injury while riding a train. For years after the accident, she suffered from migraines, blackouts, and bouts of depression that changed her life forever.

By the time she was a teenager, Nannie dreamed of living an idyllic life with her future husband. Reading romance magazines, particularly the “lonely hearts” columns, became a cherished pastime and escape from her abusive father. 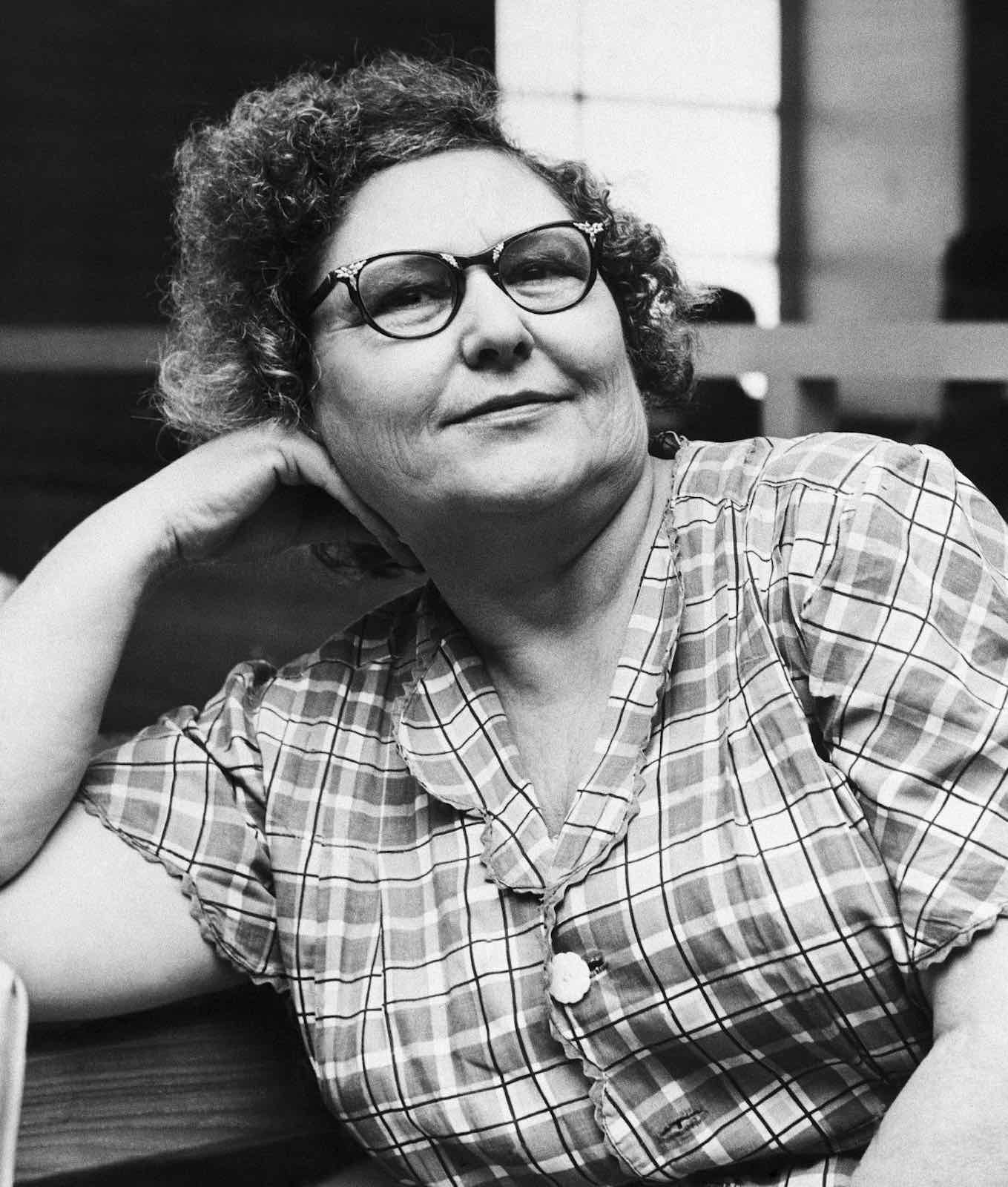 At the age of 16, while Nannie Doss was working in a linen factory, she met Charley Braggs, a co-worker who took care of his unmarried mother. They began dating, and within five months were married and had moved in with Braggs’ mother.

But Doss’ attempt at escaping the oppressive environment she grew up in was futile. Her mother-in-law turned out to be just as controlling and manipulative as Doss’ father had been.

Nannie Doss and Charley Braggs had their first child in 1923, followed by three more over the course of the next three years. Doss’ life became an unbearable prison of raising children, taking care of her mother-in-law, and putting up with an abusive, adulterous drunk of a husband. To cope, she began drinking and having her own adulterous fun, thus proving that her marriage was doomed. 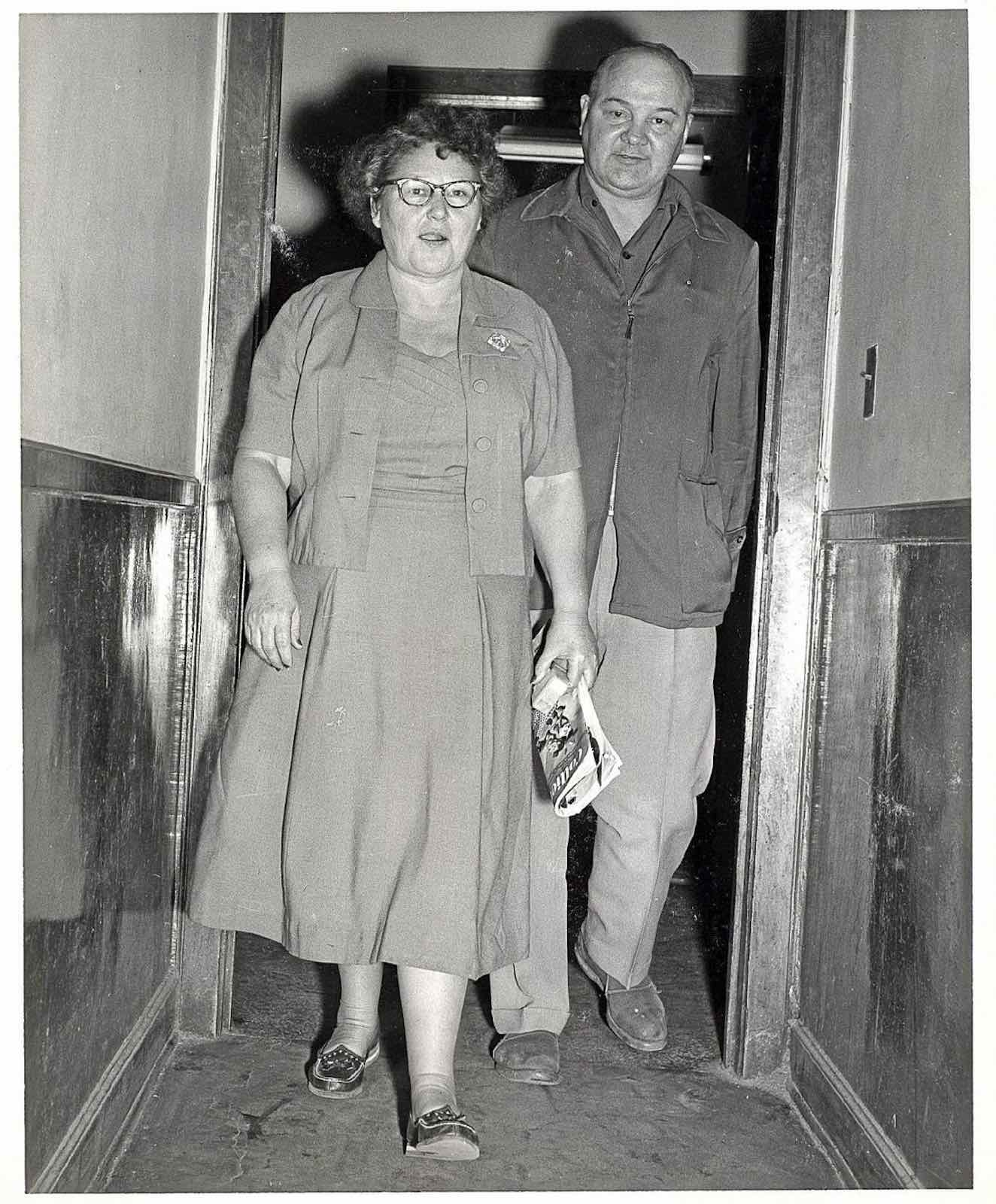 In 1927, soon after the birth of their fourth child, the Braggses’ two middle children died from what doctors thought to be food poisoning. Suspecting that Doss had poisoned them, Charley left with their oldest daughter, Melvina, leaving their newborn, Florine, and her mother behind.

Not long after Braggs left, his mother died. Doss remained in the Braggses’ family home until a year later, when Charley returned with Melvina and his new girlfriend. 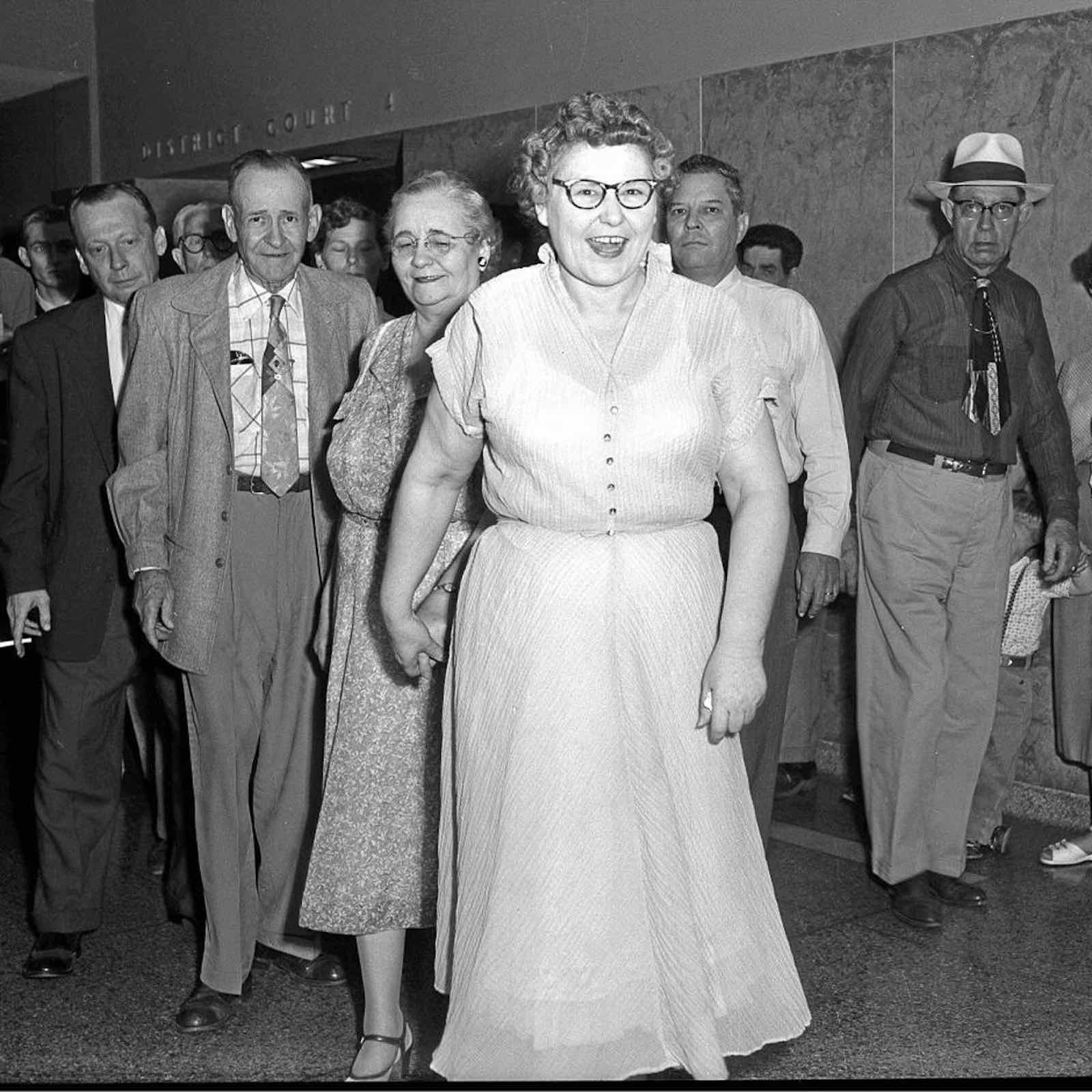 Nannie and Charley divorced in 1928, and Doss left with her two daughters and moved back to her parents’ house. 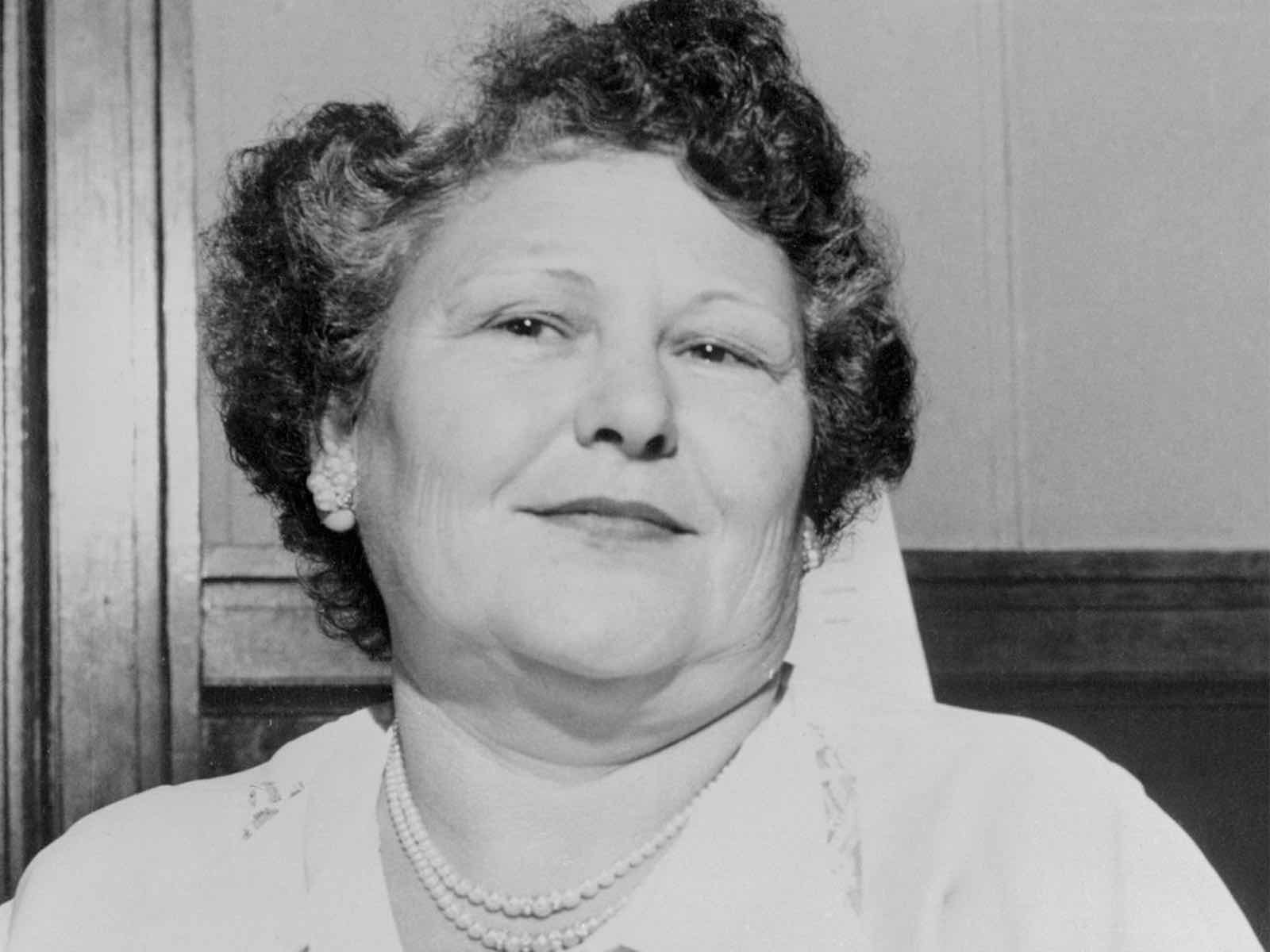 Just a year after the divorce from Charley, Doss married her second husband. He was an abusive alcoholic from Jacksonville, Fla. named Frank Harrelson. The two met through a lonely hearts column, and they soon moved in together along with Melvina and Florine.

Doss learned once again that she had not married a hero from her romance novels, but despite the abuse, the marriage lasted for another 16 years until Harrelson’s death in 1945. 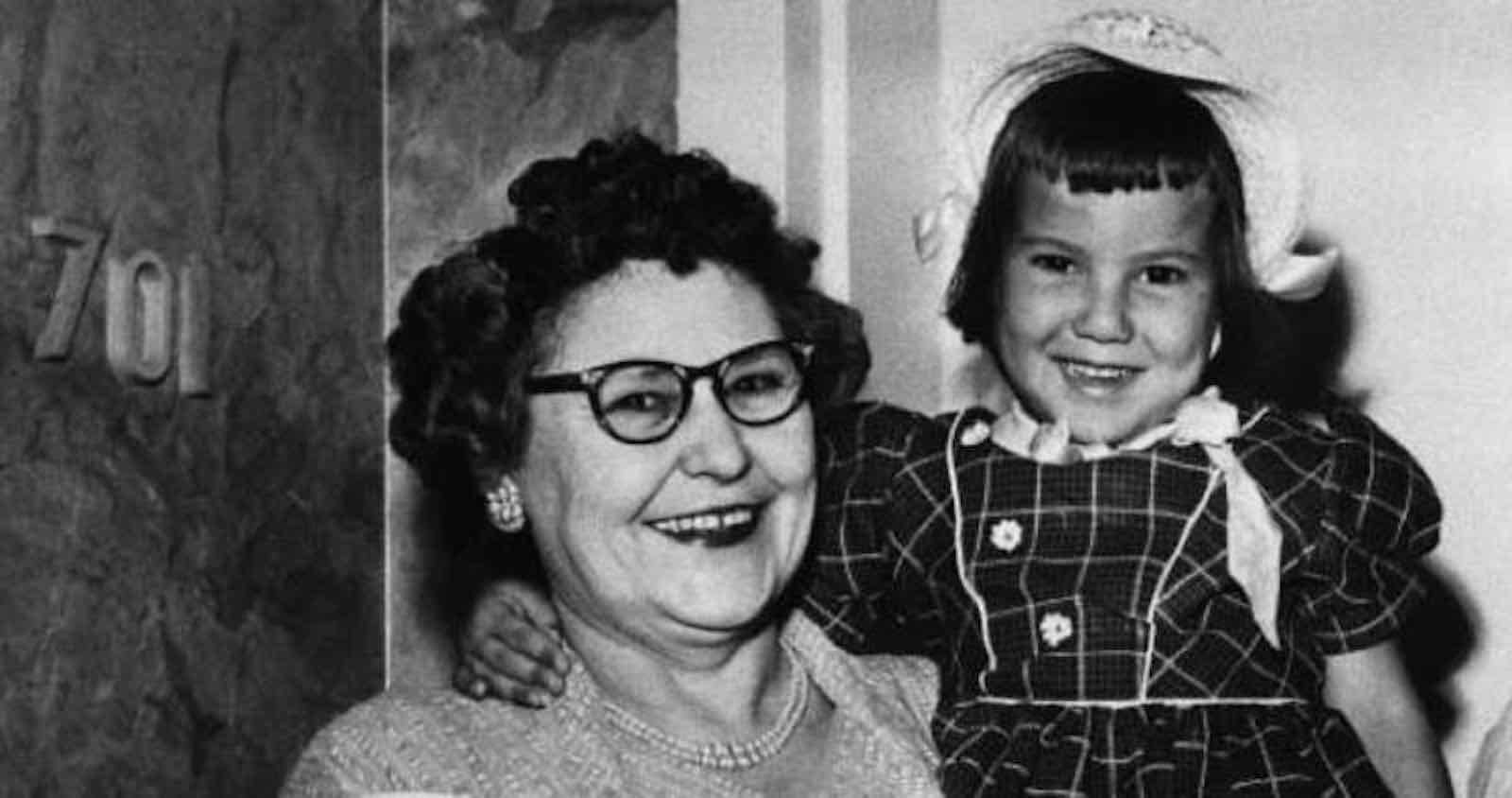 During this period, Doss likely killed her own newborn granddaughter (Melvina’s second child) a few days after the birth using a hairpin to stab her in the brain. A few months after the granddaughter’s death, her two-year-old grandson, Robert, died of asphyxiation while in Doss’ care.

Harrelson was next on the murder list, and following a night of drunken revelry at the end of WW2, Doss mixed rat poison into his jar of corn whiskey. He was dead less than a week later on September 15, 1945. 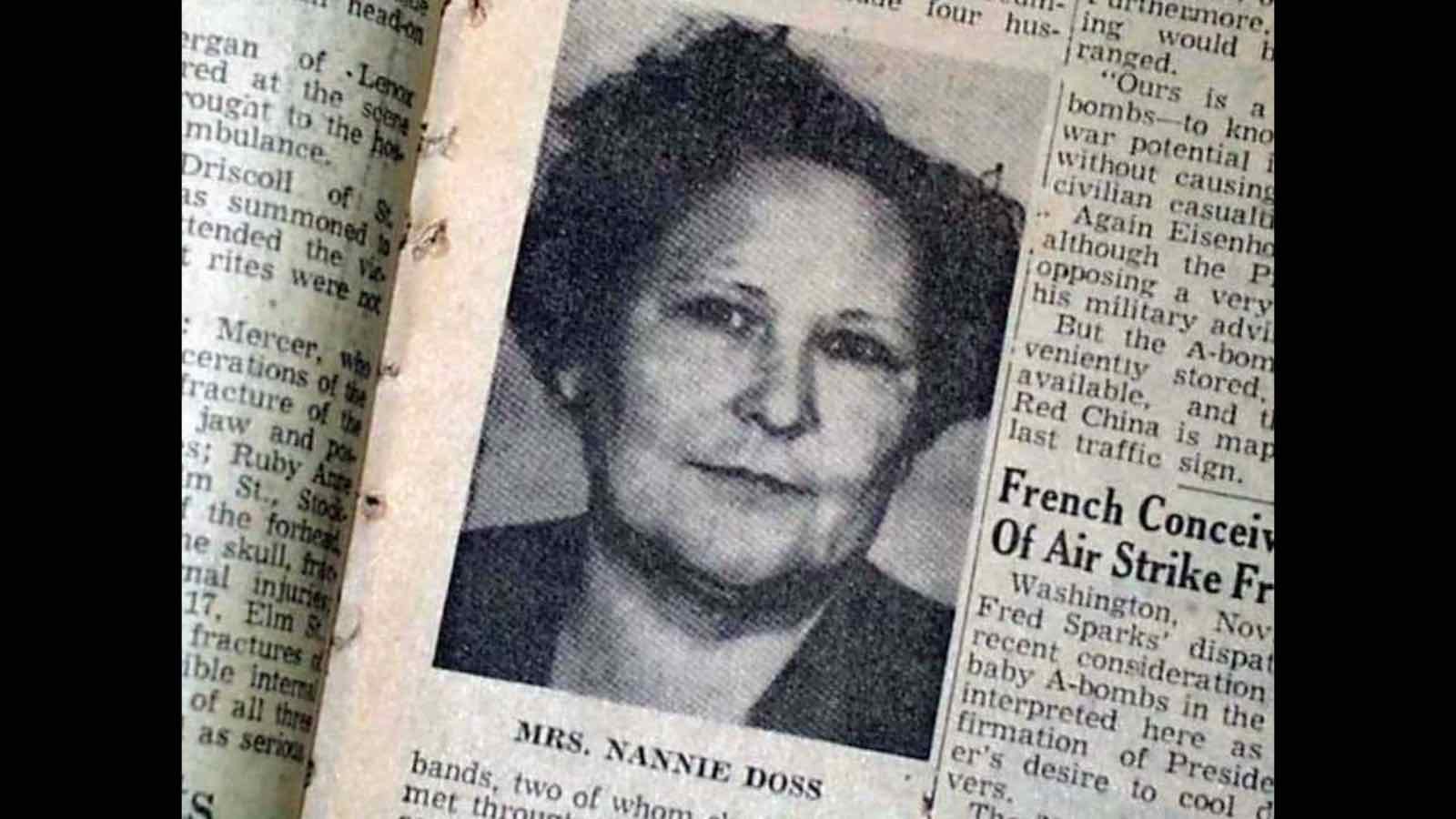 Figuring it had worked once, Doss returned to the classified ads for her next husband. Within two days of meeting each other, Doss and Arlie Lanning were married. And after two and a half years of marriage, Lanning became ill and died.

At the time it was believed that he died of a heart attack brought on by a bout of the flu. With a history of drinking, doctors believed his body simply succumbed and an autopsy wasn’t performed. 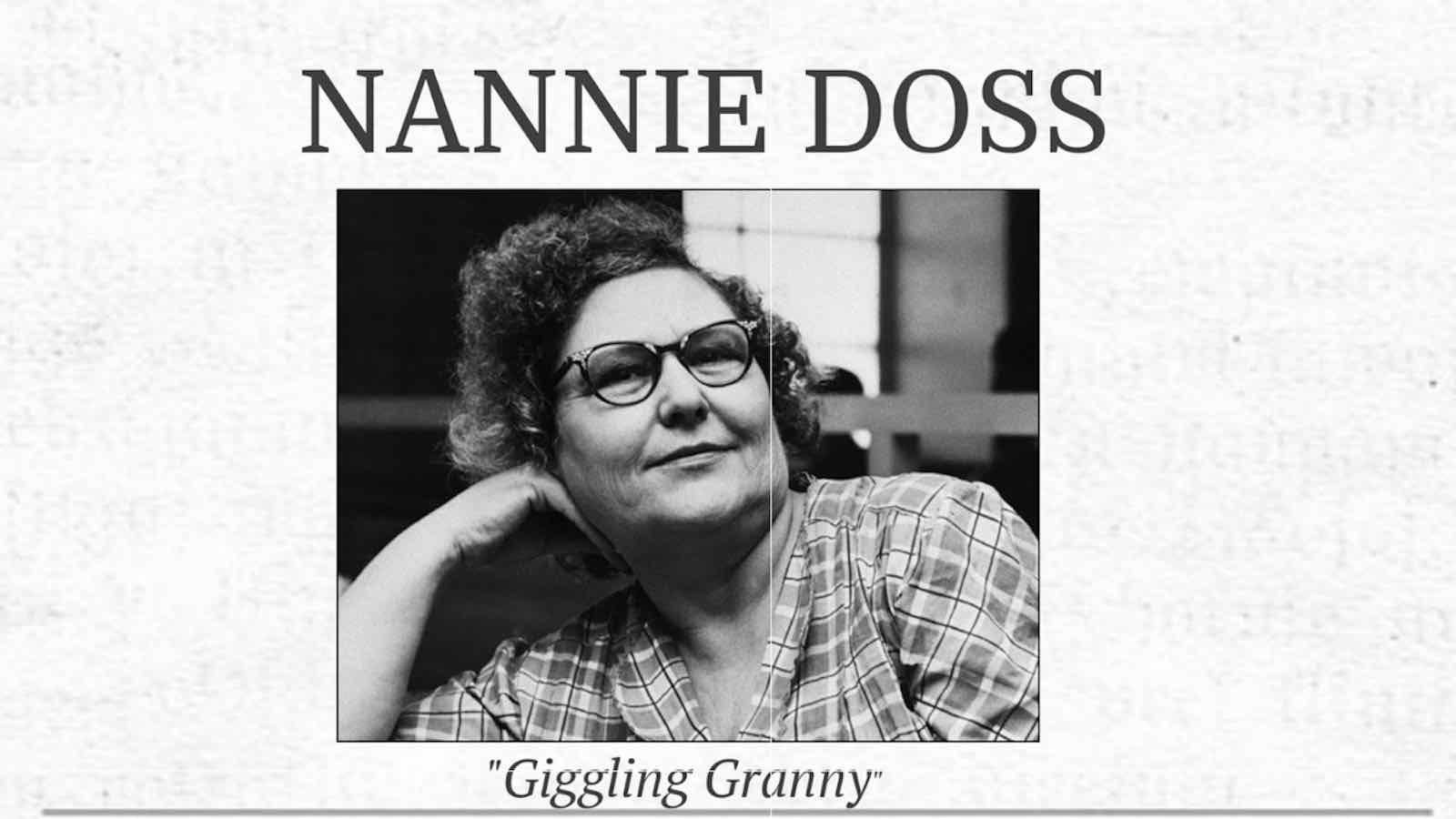 Not surprisingly, Dovie soon died, too, while in Doss’ care. 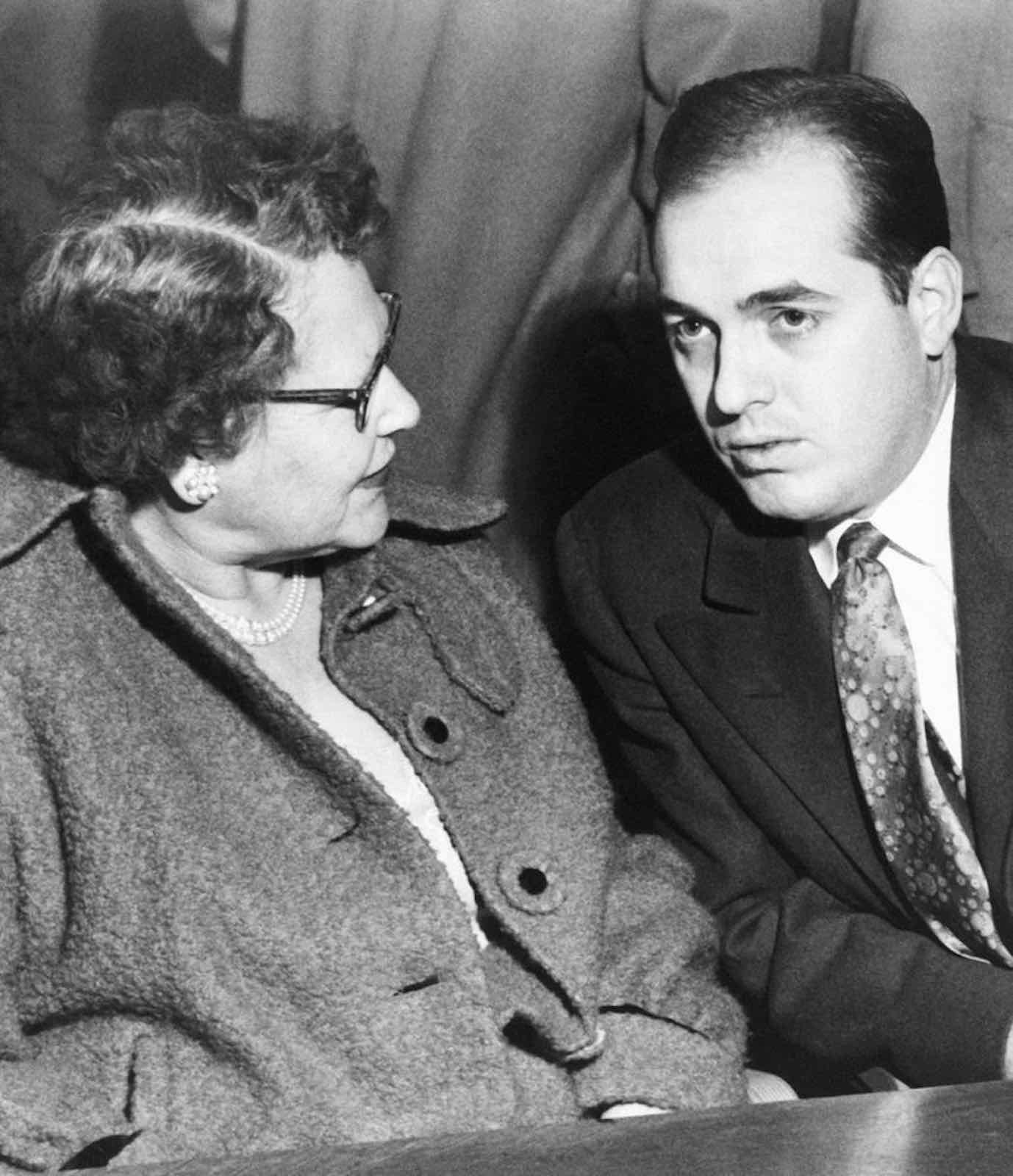 Richard Morton of Empora, Kansas, was Doss’ next true love, although he spent a lot of time with other women while married to Doss.

Doss, however, had yet to learn of Morton’s adulterous ways because she was “caring” for her mother after she fell and broke a hip in 1953. The woman died suddenly and without warning a few months after Doss agreed to take care of her. Shortly after her mother’s death, one of Doss’ sister’s died . . . you guessed it, unexpectedly.

When Doss eventually found out about Morton’s adulterous ways, he succumbed to the same fate three months later. 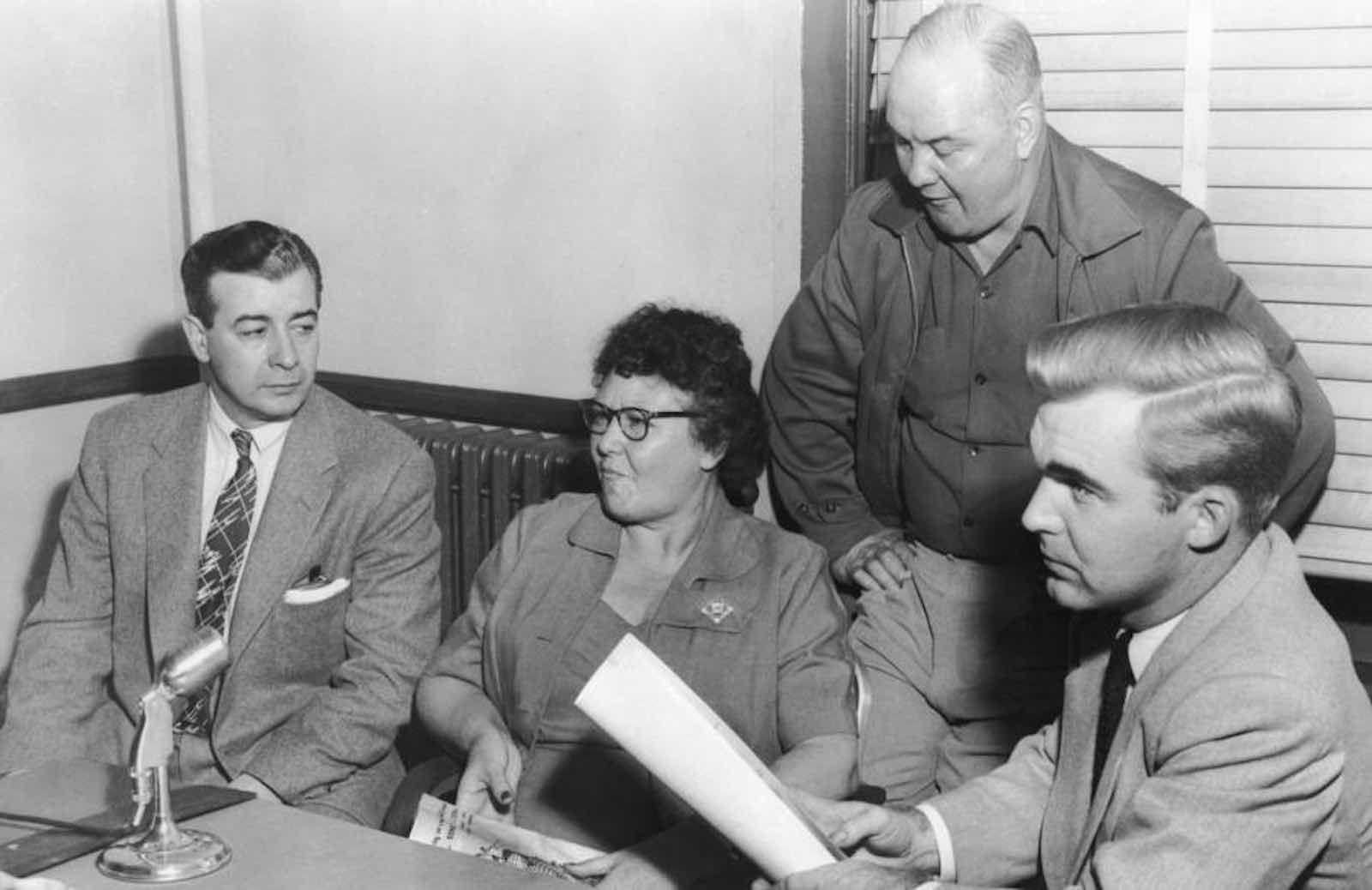 Nannie Doss’ final victim was Samuel Doss of Tulsa, Oklahoma. He was neither a drunk nor abusive. He simply made the mistake of telling his wife that she could only read magazines or watch television shows that were for educational purposes.

She laced a prune cake with poison. Samuel Doss spent the next month recovering in the hospital. A few days after he got home, poison-laced coffee finished him off.

But Nannie Doss had made a fatal error. 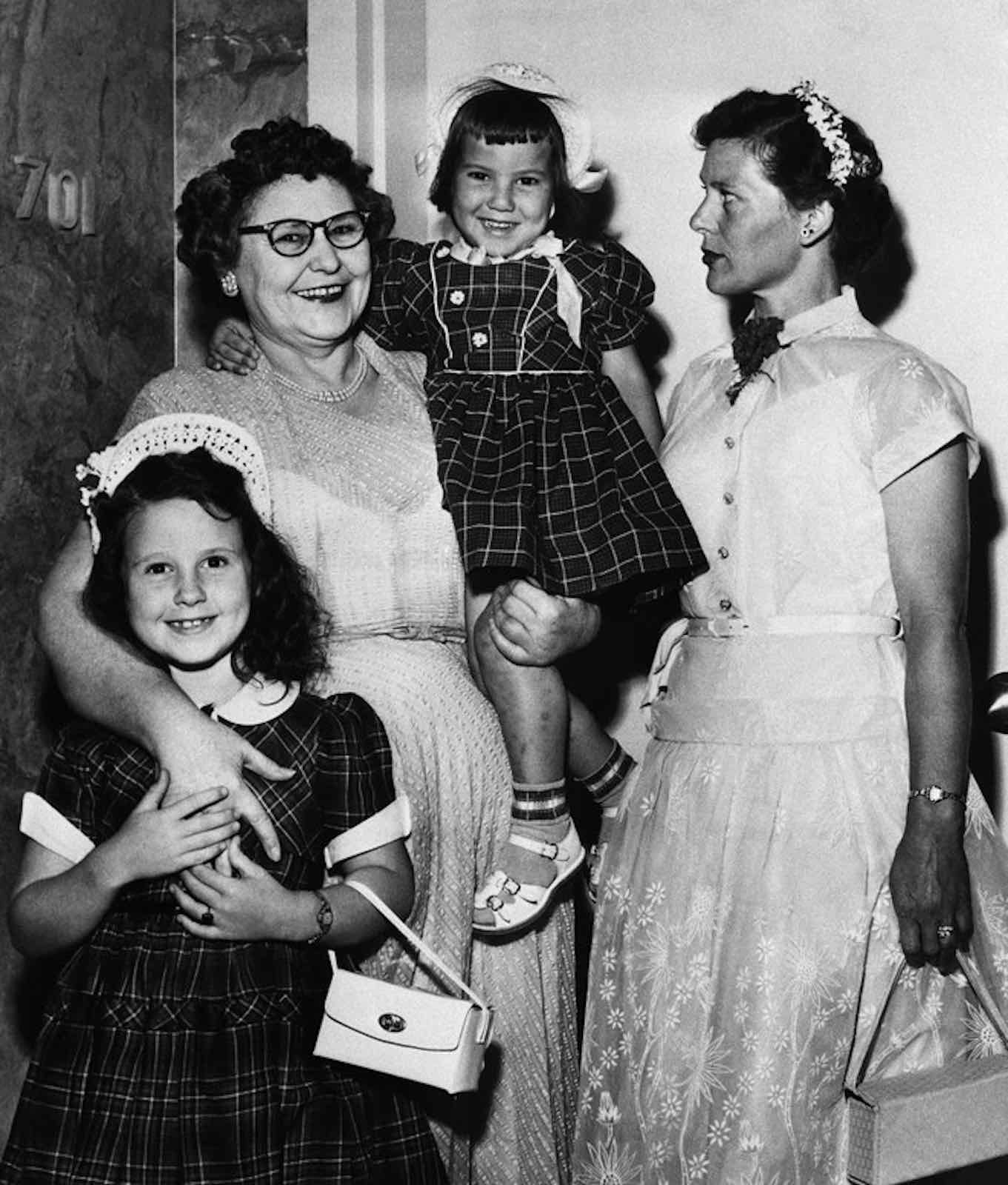 The doctor who treated Samuel Doss suspected foul play, but had no proof. So the doctor convinced Doss, who was to receive two life insurance benefits after the death of Samuel, to let him perform an autopsy.

The doctor found huge amounts of arsenic in Samuel Doss’ body and immediately alerted authorities. Nannie Doss was arrested in 1954.

She soon confessed to killing four of her five ex-husbands. 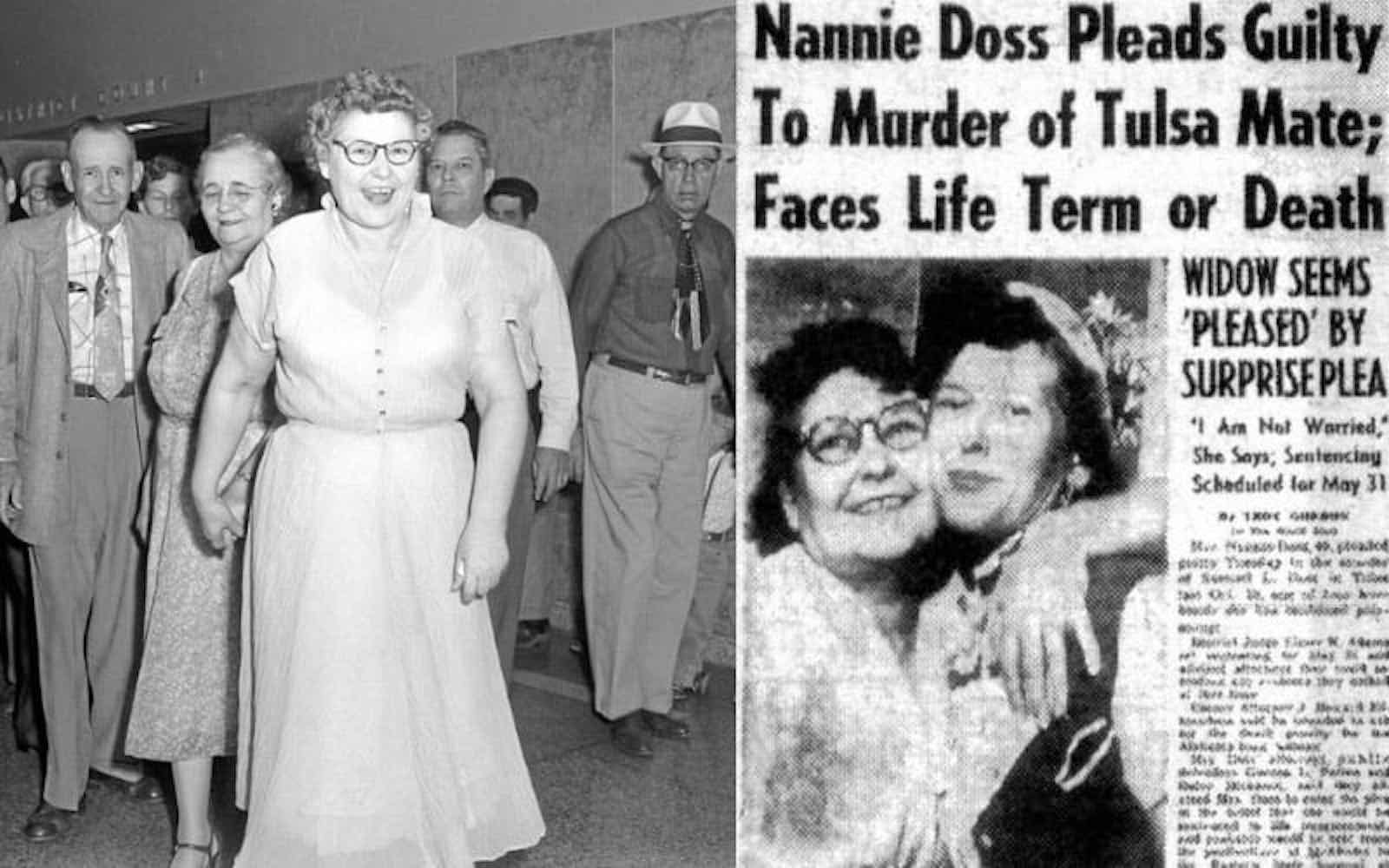 After Doss’ confession, authorities exhumed some of Doss’ previous victims and found extraordinary amounts of arsenic or rat poison in their bodies. The Grinning Granny’s calling card was to poison her loved ones with drinks or food spiked with huge amounts of poison, with investigators suspecting Nannie’s kill count to be as many as 12.

Doss blamed her murder spree on her brain injury. Meanwhile, journalists gave her the moniker Giggling Granny because every time she would tell her story, she laughed. 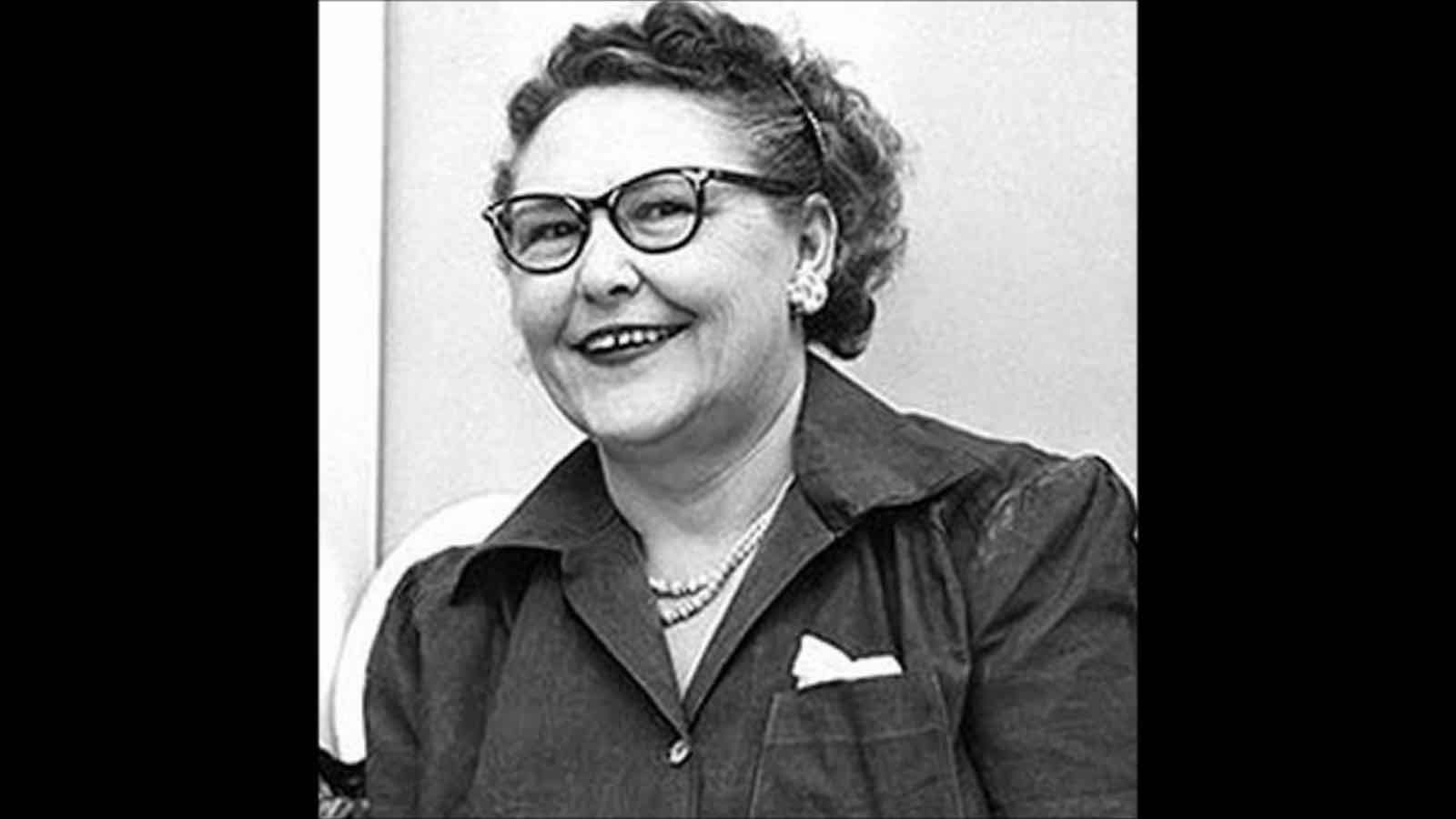 But despite being a horrific murderer, Doss seemed to enjoy the limelight of her arrest. She often joked about her dead husbands and the methods in which she used to kill them. Those in the courtroom, however, failed to see the humor in her behavior.

On May 17, 1955, Doss, who was 50 years old, was given a life sentence. And in 1963, after spending eight years in prison, Nannie died of leukemia in the Oklahoma State Penitentiary.

Did you see the movie Monster? Here’s why the true-life tale of the female serial killer is even more haunting.