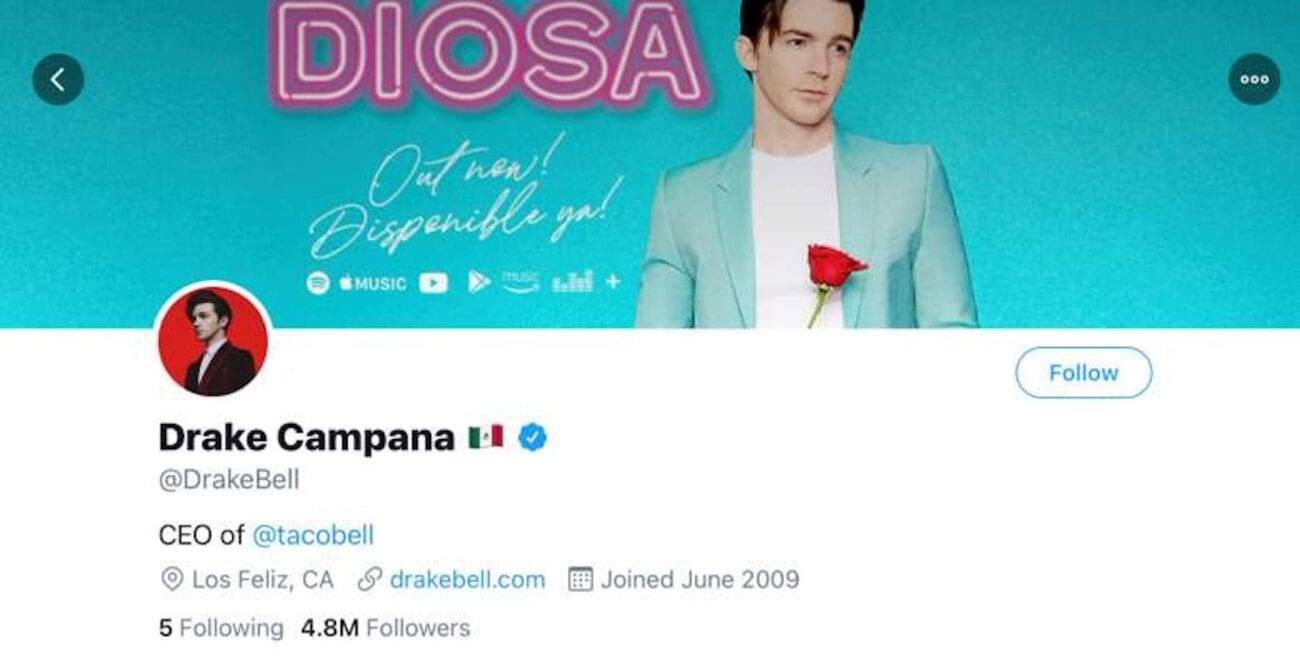 *Is* Drake Bell the CEO of Taco Bell? The best memes to convince you

2020 has been a wild year all around. One thing that people didn’t expect was Drake Bell changing his name to Drake Campana and becoming a Spanish-language pop star. While, originally, fans believed that the rebranding and renaming was due to his higher sales in Spanish-language countries, it doesn’t seem to be the case. Campana’s ex-girlfriend Jimi Ono detailed the alleged abuse that she faced from him on TikTok.

Now, if 2020 wasn’t crazy enough, Campana is claiming that he’s the CEO of Taco Bell. That’s right. He’s saying that he’s in charge of the chain of stoner oasis. Naturally, there are memes about Bell’s alleged new position. And if you had “Drake Bell changes his name to Campana, becomes a Spanish-language pop star, and says he’s the CEO of Taco Bell” on your 2020 bingo card? Highly specific but mark it off.

Here’s some of the funniest memes out there on this.

@DrakeBell @tacobell DRAKE BELL IS THE CEO OF TACO BELL, I hope that you take this position seriously and give us the people what we need. Bring them back pic.twitter.com/A94A6WFiLy

In related news, his twitter bio says he's the CEO of @tacobell. So can we get those potatoes back now, Drake?

Campana is just going to be blasted with people wanting to get their favorite items back on the menu because they are gone far, far too soon. But, seriously, can we get those potatoes back please? Please?

Seriously though, if you’re going to become a Spanish-language artist and move to Mexico? Maybe support things that are actually Mexican food over Taco Bell, which really isn’t.

Me: I don’t see why drake is in my wrapped I ain’t even listened to him that much

Me earlier this year: pic.twitter.com/WBst3eddOt

PLEASE NOT THE ceo of taco bell AND THE MEXICAN FLAG EMOJI AND THE SPANISH MUSIC drake bell aka el drey campana is a disease pic.twitter.com/bgm0GYiVnP

5. What will happen next?

To be fair, Campana does have abuse allegations against him amongst other things. So maybe we should just let him have his public breakdown and then he can go away? Honestly, he probably wouldn’t go away. Sigh. Why don’t our cancellations stick?

6. But seriously did anyone have this on their 2020 bingo card?

Taco Bell? Care to comment on this? Do you have a new CEO and is his last name Campana? Why won’t you say anything to us, Taco Bell? Why do you remain so silent and far away from us? Why did you get rid of Mexican pizza?

Drake Bell’s transition to Drake Campana is fascinating. His bio says he’s the CEO of Taco Bell, so in other words, he has no idea what authentic Latin music/culture is.

In a nutshell, this guy has summed up everything going on with this current dumpster fire of 2020. Is it a dumpster fire? More of a trash can really. 2020 has been weird. Does anyone really know what to make of this? Really?

The fact that some people really think Drake is actually the CEO of Taco Bell…. pic.twitter.com/hYzUNMr462

9. All kidding aside though

Really and truly, he’s not the CEO of Taco Bell. He just wants to be one day because why not?