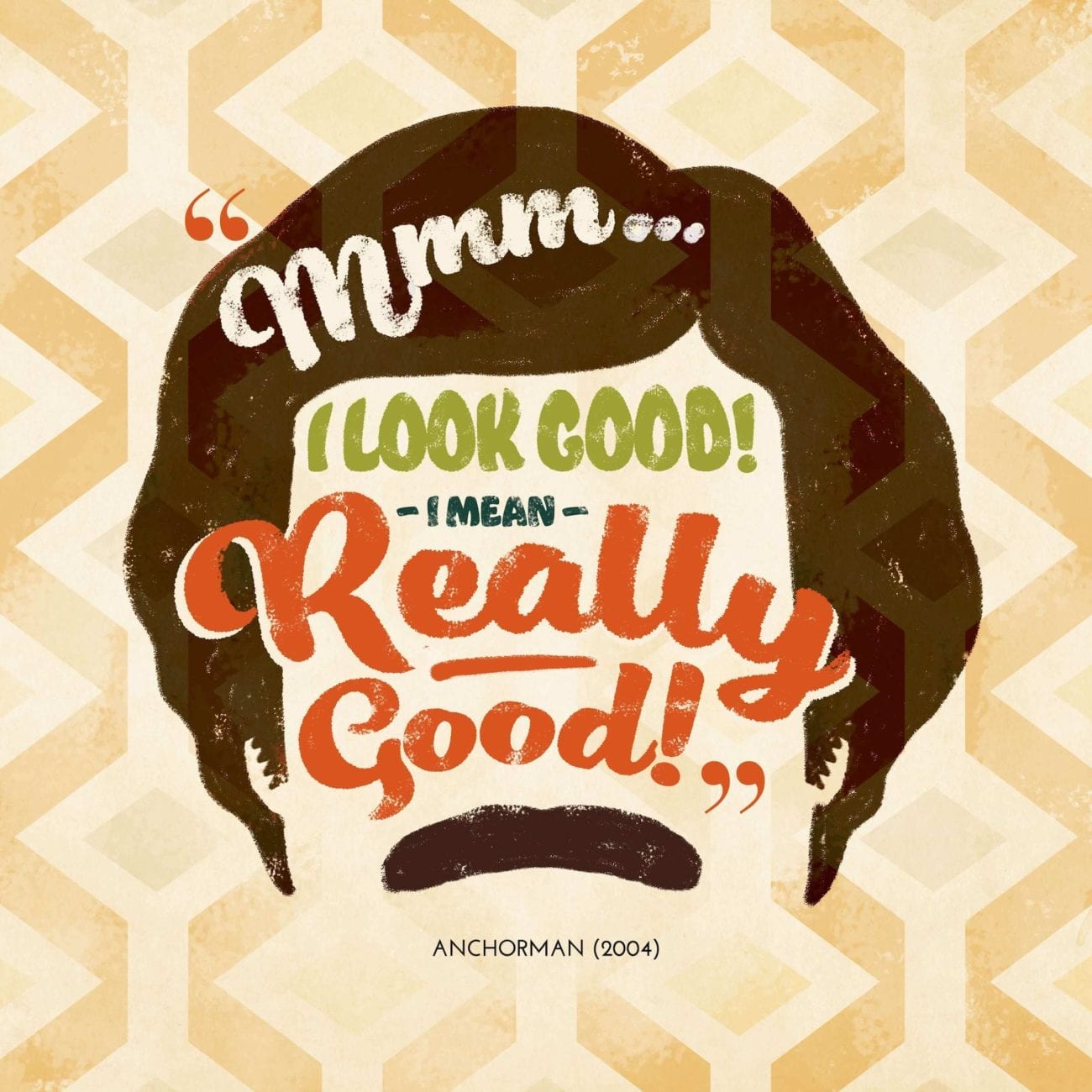 The opening of a film is crucial. All the way down to the very first line, you want to hit the ground running every time you watch a film – whether that’s a line that creates intrigue, hooks you in, makes you laugh, or just stays in your mind long, long after you’ve finished watching.

Department store Oldrids & Downtown’s latest content project has focused on turning some of those famous opening lines from TV & film into funky works of art that encapsulate their visual themes. There’s a real mixed bag below, so let’s see what they came up with. 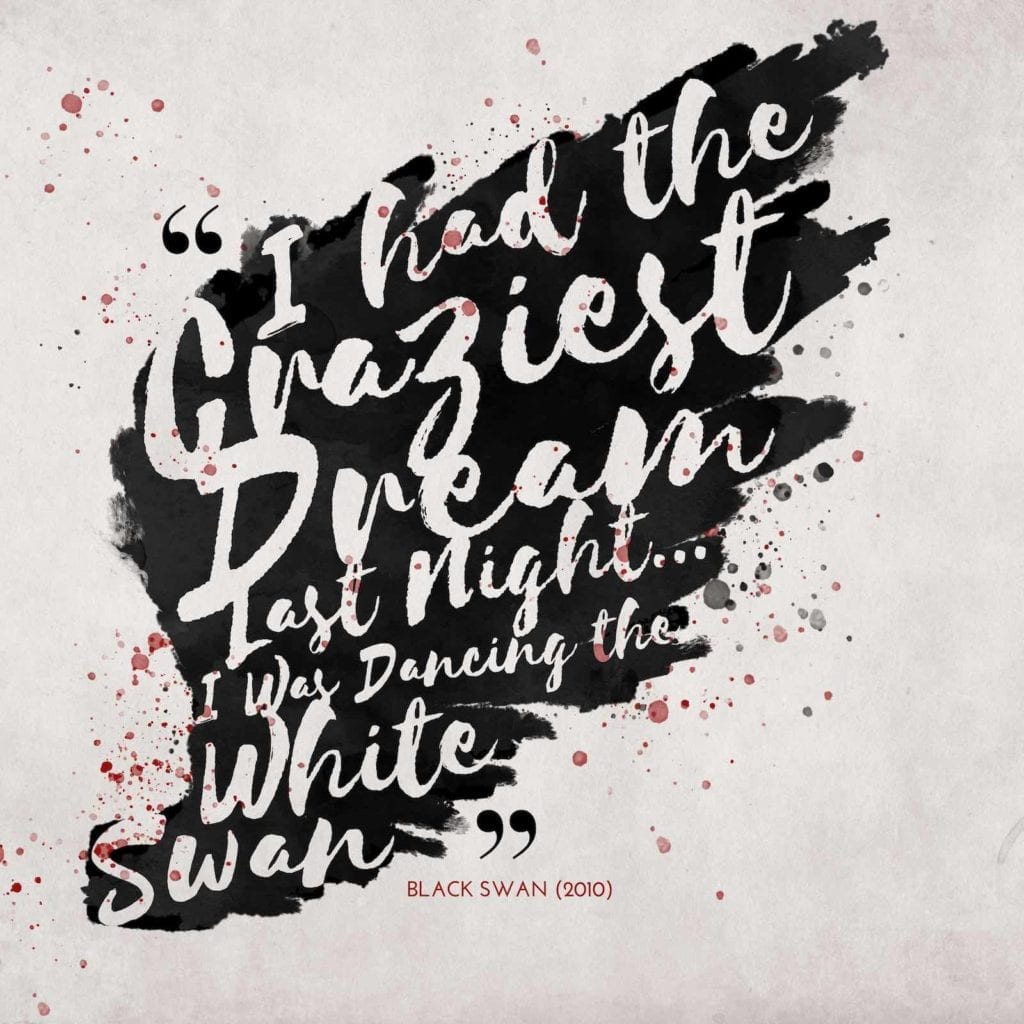 This film is a psychological thrill ride that deals with the Manichean qualities of artistic expression and the challenges of striving to achieve perfection in your creative discipline. Director Darren Aronofsky became interested in ballet when his sister was a student of the famously punishing art form.

The film was criticized for playing up too-tired tropes of ballet dancers and performers, and while that point is certainly valid for ballet dancers, this isn’t really the central message of the film. Black Swan is an excellent example of how creative cinematography and editing can create tangible feelings in the viewer.

The stress, pace, and pressure of ballet dancing make a convenient backdrop to take the viewer down the rabbit hole of madness with the protagonist, played by Natalie Portman. Is the success of a film measured on how accurate its portrayals are, or the effect it has on you, the audience? Black Swan is good evidence of the latter. 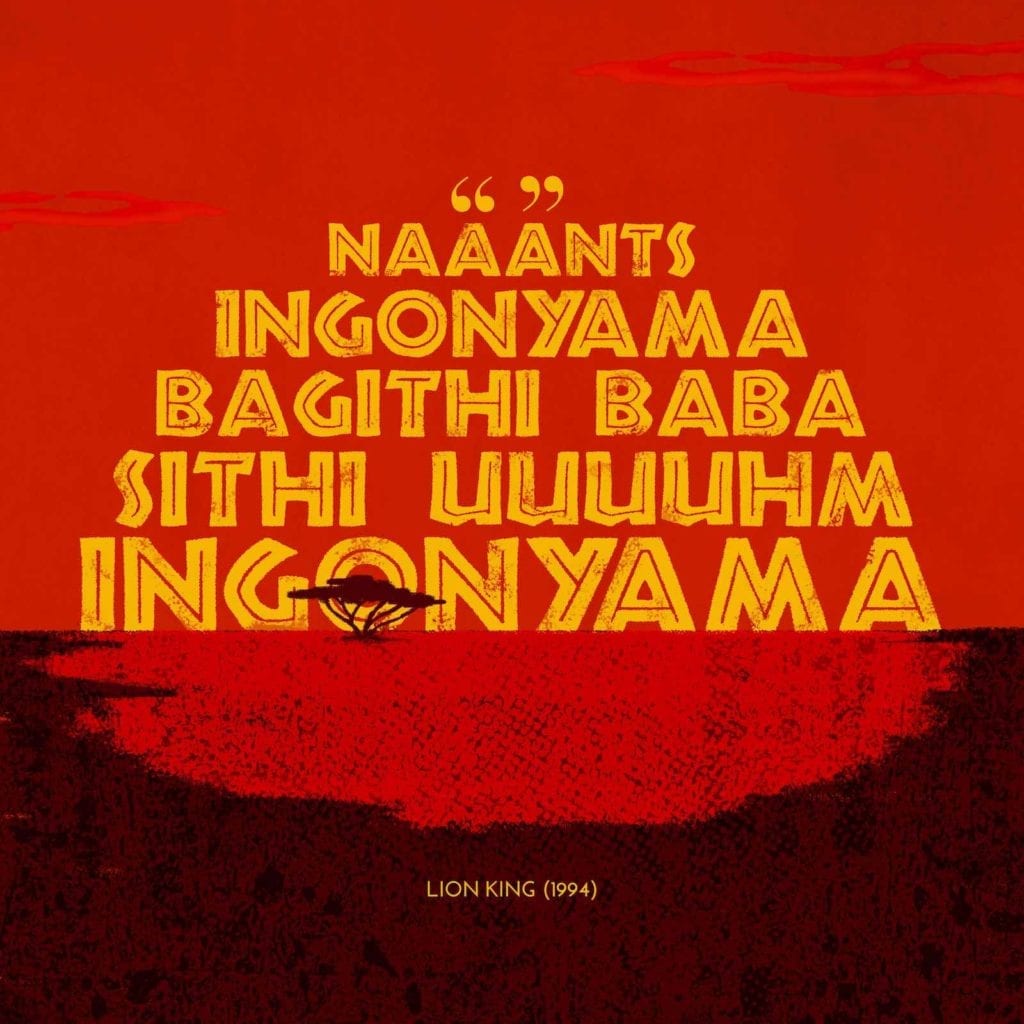 The opening line of The Lion King is belted out in Swahili and translates as “Here comes a lion, father. Oh yes, it’s a lion!” Swahili has up to 150 million speakers around the world and is a wonderful combination of Bantu speech expressed in Arabic script.

This artwork captures the visual theme of The Lion King: the blazing, scorching savannah and the ensuing power struggles of the animal kingdom within. This film isn’t quite so bread-and-butter as you may think – some argue that Scar was actually the good guy in The Lion King. Watch it again and you be the judge. 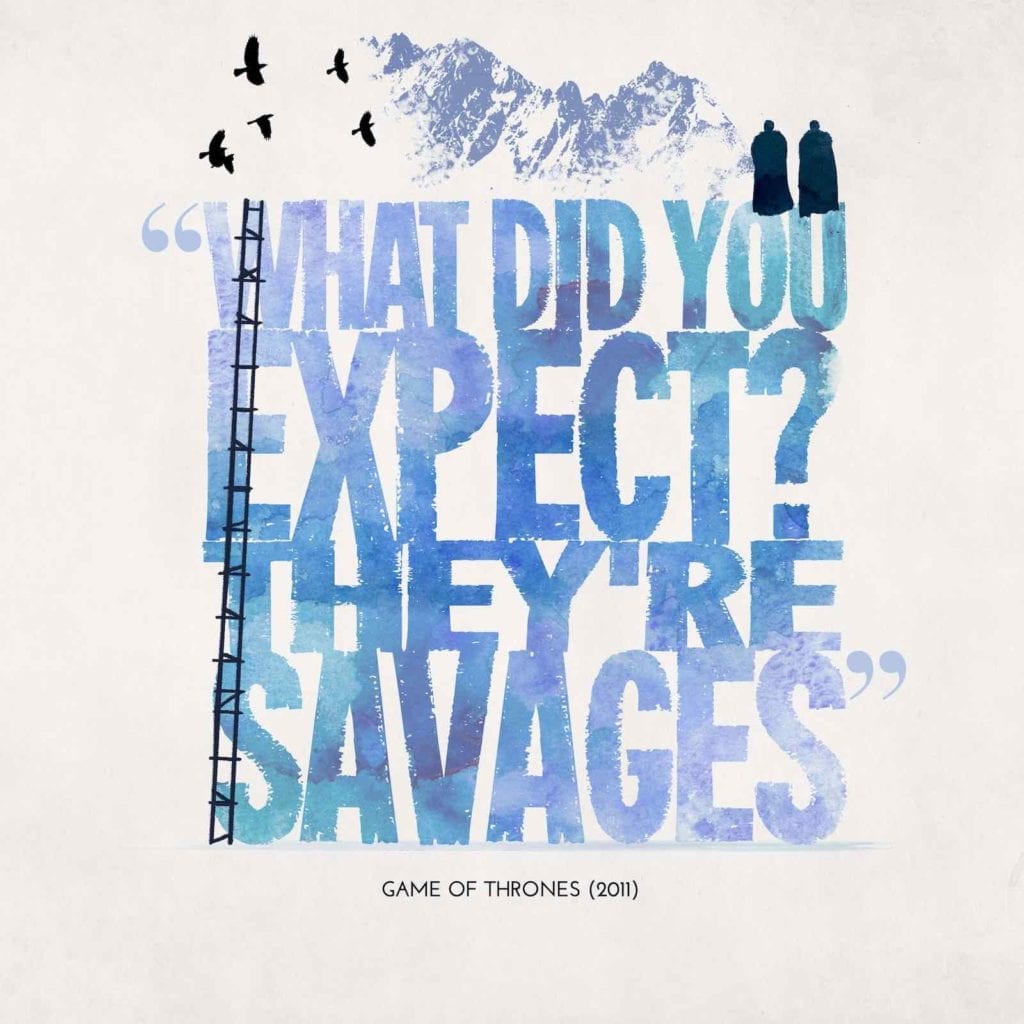 Based on the expansive novels of George R.R Martin and the incredibly detailed fictional universe therein, Game of Thrones is a TV adaptation that has captivated the world with its gritty, sexy tone.

Post-Lord of the Rings, fantasy is a more difficult genre. How can you come close to the success of the genre-defining Tolkein/Jackson epics? Martin has taken some classic themes from fantasy – dragons, knights, princesses, wizards, necromancers, etc. – and thrown in a dash of very real medieval European history.

The human stories of Game of Thrones are what make it so compelling. The power struggles we see are essentially the War of Roses in Tudor Britain. Where Tolkien’s heroes were morally infallible, there are almost no heroes in Game of Thrones.

Also, absolutely no one is safe from being killed off, meaning you are always on your toes while watching, aware that anyone can perish at any moment no matter how central to the current storyline. 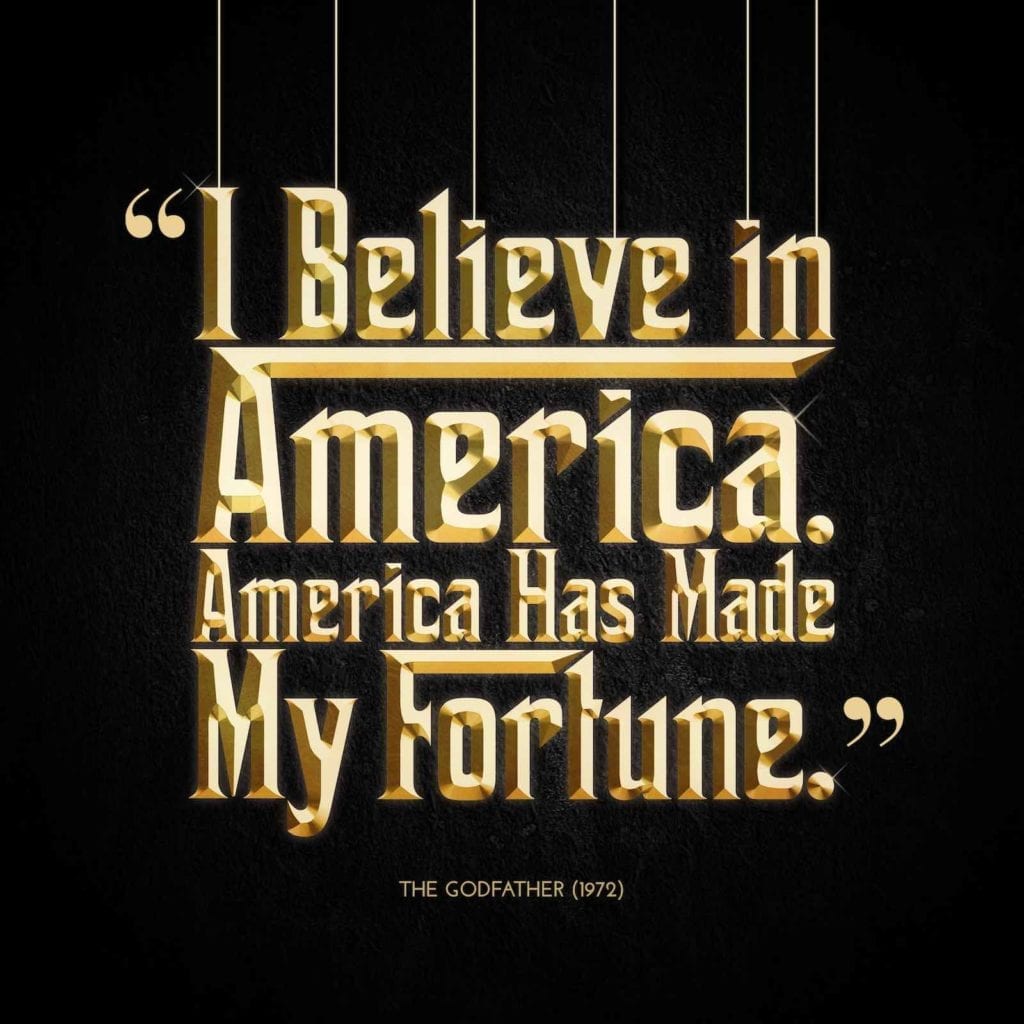 At the height of cinema history dwells The Godfather. Everything about it represents what a classic film fan looks for from cinema. A lot has been said for films that are more than two hours long, but The Godfather has to be as long as it is. How could you cut any of it out?

The opening line is spoken by Bonasera, asking Don Corleone for justice on the day of his daughter’s wedding. What follows is one of the most memorable & iconic opening sequences in film history. Marlon Brando delivers a pitch-perfect performance as the patriarch of a Mafia family.

The Godfather is an excellent foray into the twisted morality of organized crime. Despite the heinous crimes they commit, there’s a code of honor, a law beyond the law – appealing to our fascination with the people who make their own rules. The film is shot beautifully and the soundtrack is amazing, featuring legendary performances from legendary actors.

This poster perfectly sums up the visual spirit and messaging of the film. 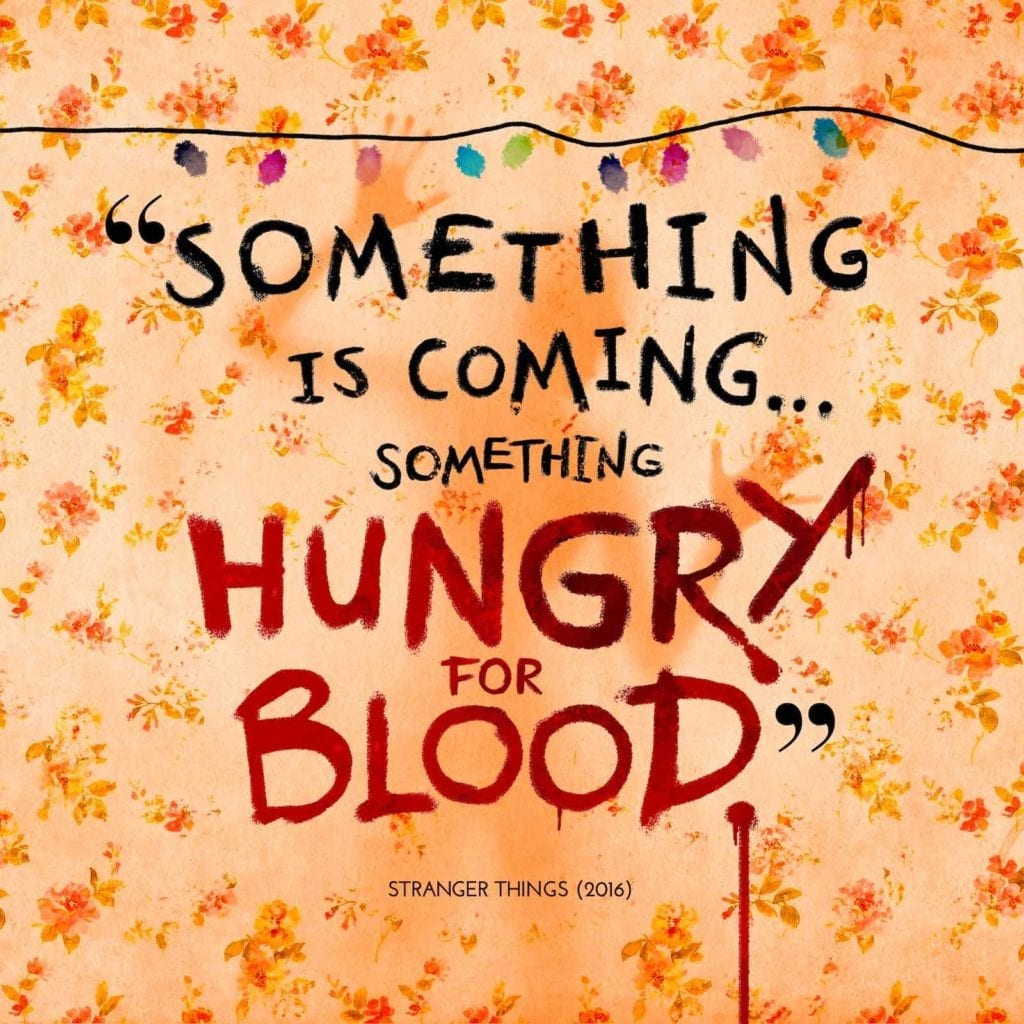 This ominous opening line forebodes all the interdimensional madness that unfolds in Netflix’s smash hit Stranger Things. The opening line isn’t quite as effective as the title sequence, however: a bass-heavy synthesizer masterpiece that instantly makes you feel like you need to buckle up for something crazy.

Following four friends in the 80s in a small town in Indiana, they get more than they possibly could’ve bargained for when one of them goes missing near a top-secret government facility. Packed with 80s pop culture references, this series is a journey back in time, with nostalgia underpinning a seriously strong plotline – all expertly delivered by child actors who don’t miss a beat, and of course Winona Ryder.

The opening line of Stranger Things brings the promise of violence and blood in the form of a mysterious “something”. Season Three is scheduled for release in July 2019. 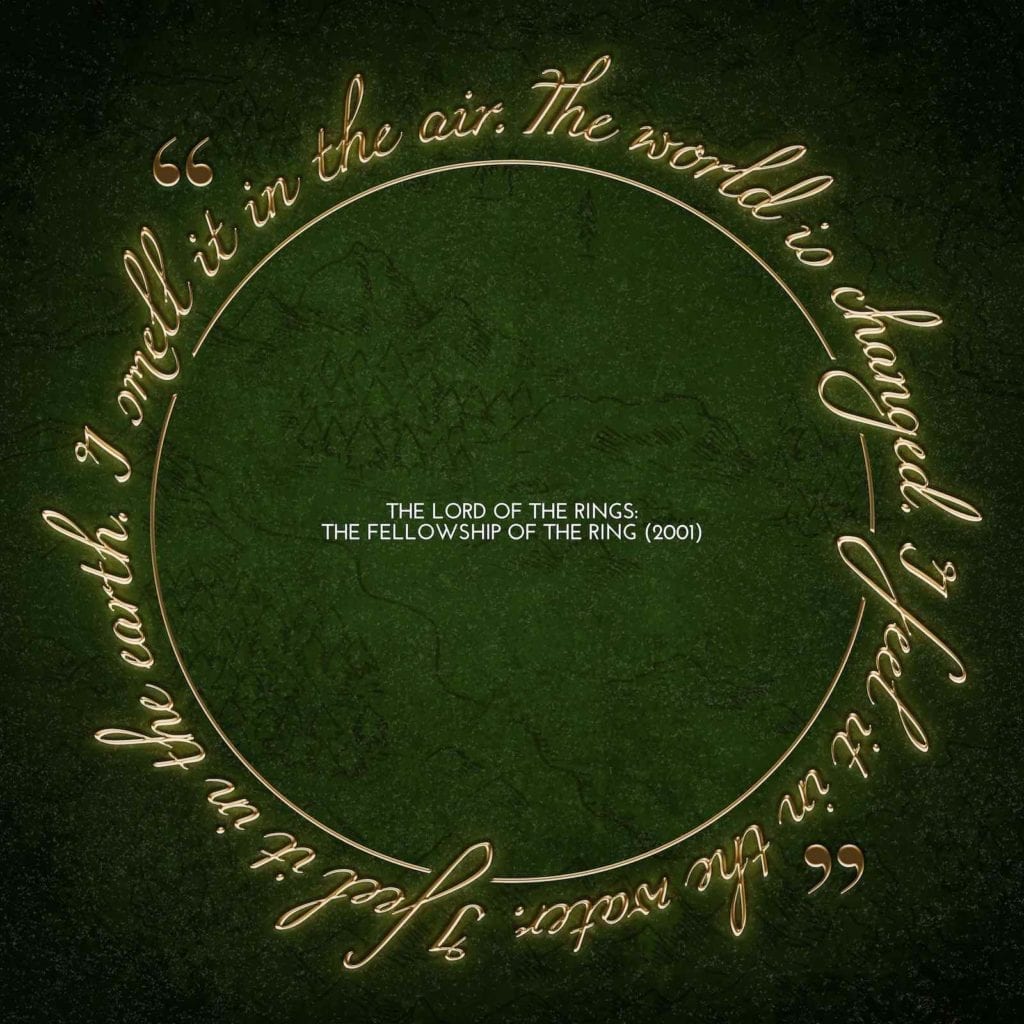 Absolutely no introduction is needed for this epic film series. For this example, Oldrids took the famous script emblazoned on the One Ring and used it for the opening line of the first film of the trilogy. The Fellowship of the Ring famously was nominated for thirteen Oscars and won four on the day – a mammoth project apparently worth all the effort in the end.

Where Game of Thrones makes no bones about the moral shortcomings of its heroes and facing up to the dark side of humanity, Tolkien’s protagonists are archetypes of the classic hero: stoic, strong, and sanguine.

Tolkien had originally intended his epic novel series to be a children’s book. However, he saw more potential in the story as an allegory for greed in adults. The only thing that tempts Tolkien’s heroes from their course is the allure of power, a message that is always relevant.

Offering us some slight relief from these otherwise meaty and serious films, we have the cult classic Anchorman. This film is an exercise in complete silliness. Shunned by film purists all over the world, this isn’t a film buff’s film but a democratized comedy riot. If you like your comedy thoughtful and intellectual, you’re in the wrong place.

Following San Diego anchorman Ron Burgundy and his news team, this film is a laugh a minute and Will Ferrell’s performance is absolutely perfect. Ron Burgundy is kind of a big deal in San Diego, and the opening line encapsulates his character succinctly.

While you may find underlying messages in this film, that’s not really its raison d’etre. It’s simply a ridiculous film meaning to get laughs from an audience that doesn’t take themselves too seriously.