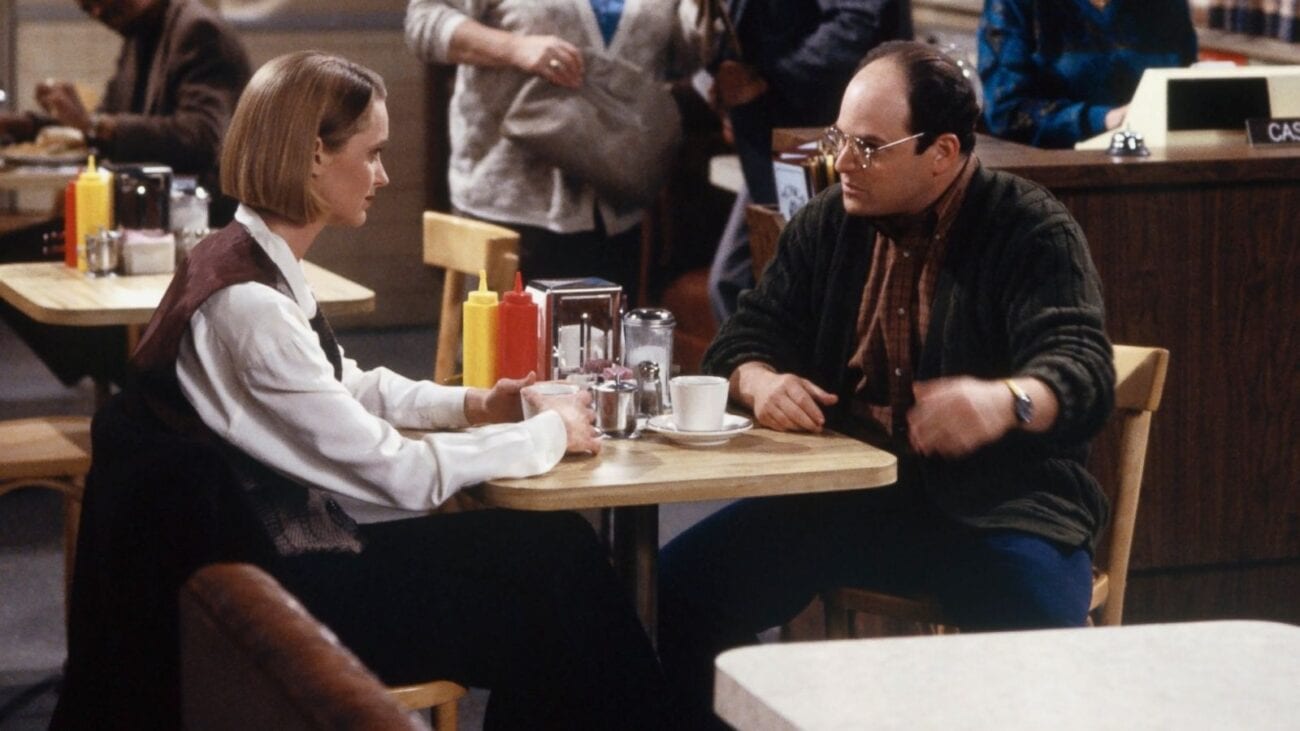 ‘Seinfeld’: All the dark humor jokes which have aged terribly

Nearly three decades after its premier, Seinfeld continues to be praised by fans of the show and comedy alike for its ability to push boundaries with often hilarious social commentary and some pretty dark humor.

A show inarguably of its time, some Seinfeld episodes have come into question for their risque moments of “humor”, especially as it’s now framed by contemporary attitudes and expectations.

Here are some of the most memorable dark humor jokes in Seinfeld that have aged terribly (and rightfully so). 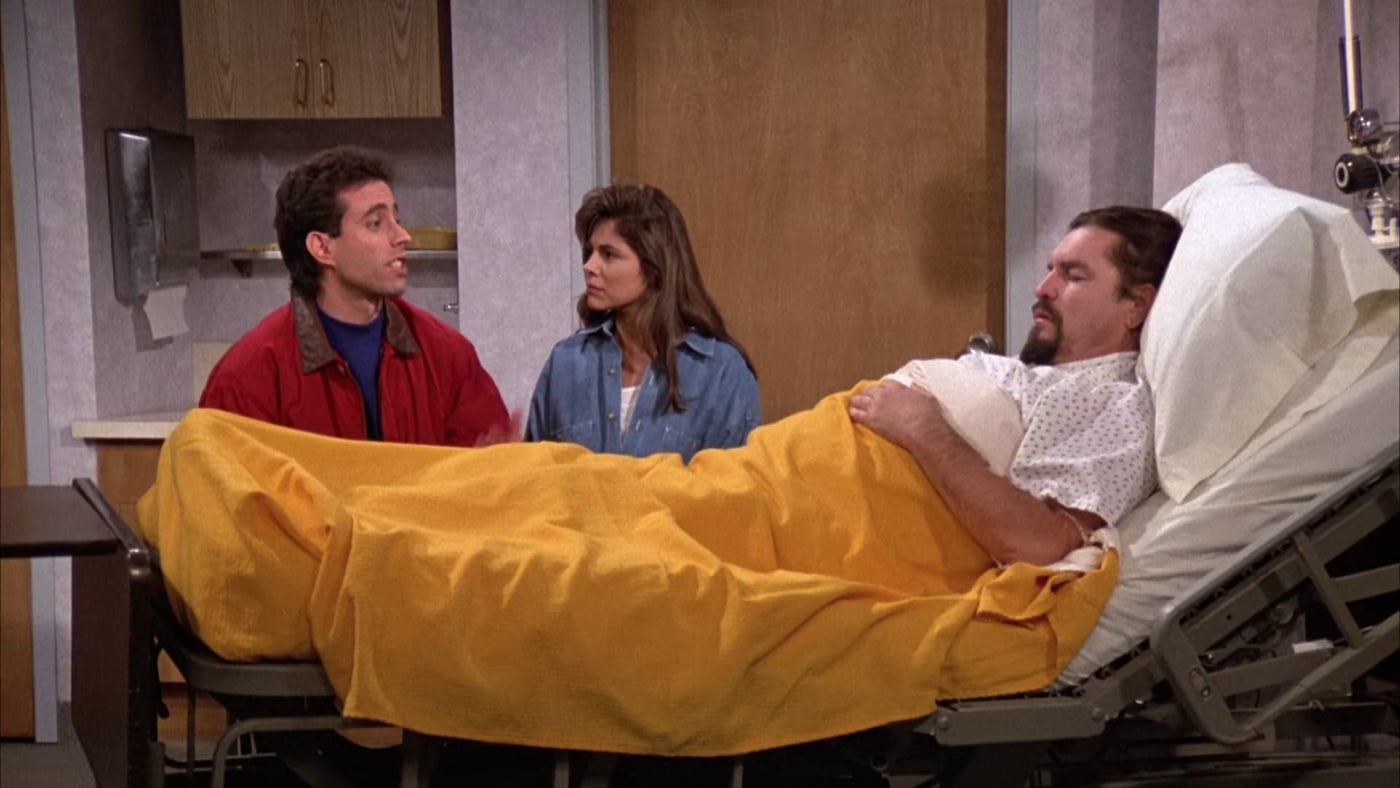 If the title wasn’t a clue enough as to the story behind this joke, let’s take a moment to fill you in. In Season 3 Episode 15 of Seinfeld, one of Jerry’s neighbors attempts suicide and ends up mortally wounded.

Instead of taking the man directly to a hospital, a gag ensues–a neurotic Jerry is unable to decide if wearing or not wearing a jacket outside would be most appropriate for the weather. Jerry’s indecision causes his neighbor to become comatose. Adding insult to injury, Jerry also pursues a romance with the incapacitated man’s girlfriend.

All joking aside–the premise of delaying an urgent trip to a hospital is bad enough in any year. But with the climbing rates of world suicides in the past decade and more attention focused on treatment for such preventable death, this dark humor episode has aged far worse than many. 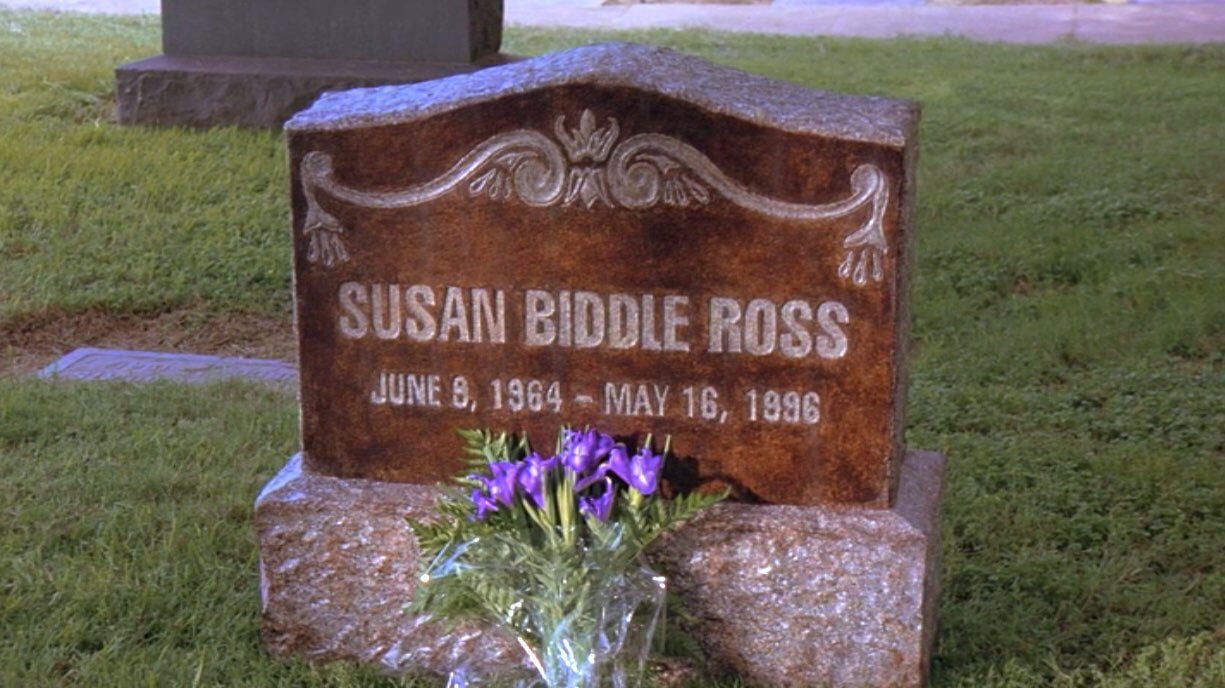 More shows than ever have come under fire for promoting outdated gender norms and stereotypes. Season 7 Episode 24 of Seinfeld is no exception–it features an episode titled “The Invitations” that finally sees George through to engagement with his current lover, Susan (Heidi Swedberg).

In classic George fashion, he becomes wrought with doubt and anxiety over the permanence of marriage. In one attempt at sabotage, George buys cheap wedding invitations, that unbeknownst to him, are riddled with toxic adhesive. The joke occurs when it’s revealed that Susan has been killed by poisoning due to licking and sealing all envelopes by herself.

Despite the cast of characters’ obvious ambivalence over Susan’s death, another tragedy comes from Susan’s confinement as the archetypal “devoted wife” whose sole function is to overreact and plan a wedding while George has little interest in their “love.” One of the many cases of collateral love damage in Seinfeld, Susan faces categorization or death. 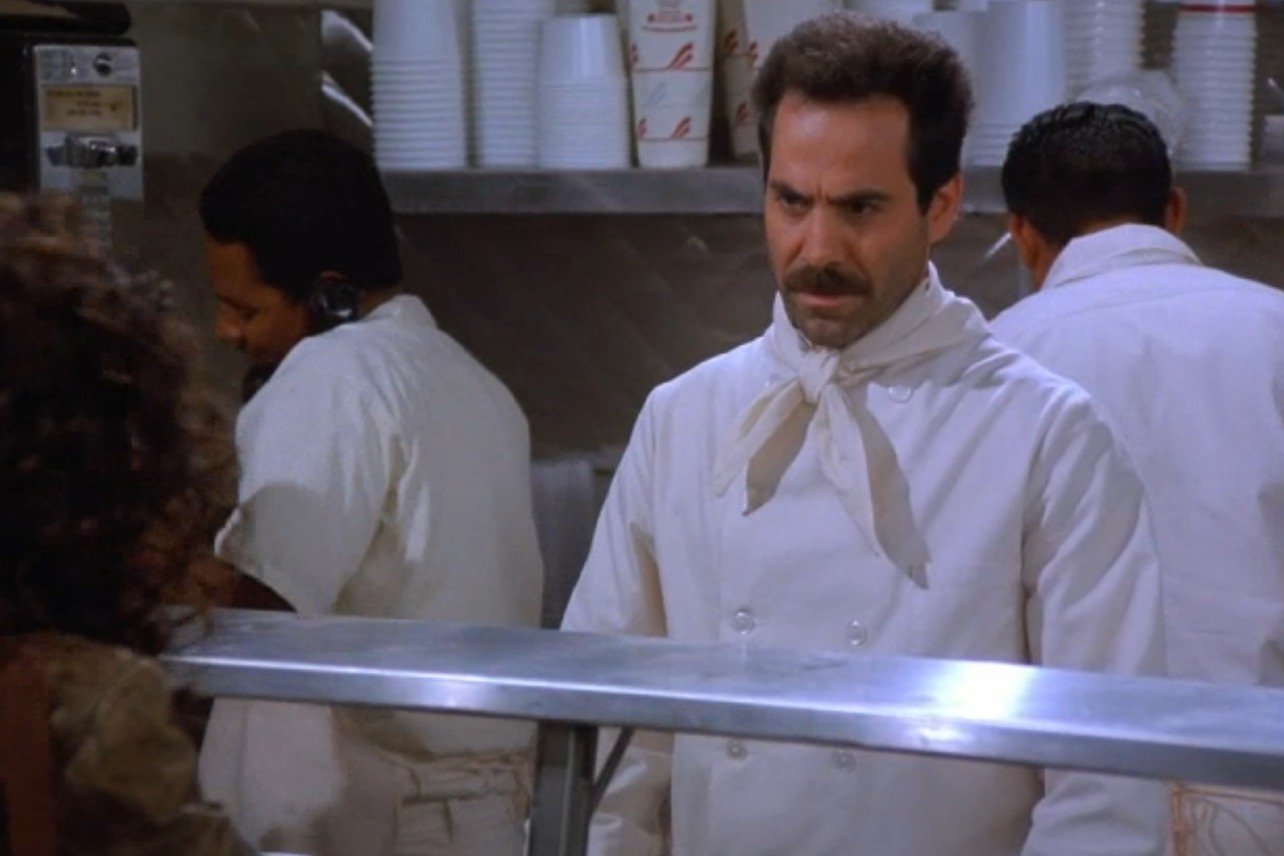 Seinfeld writers and creators Jerry Seinfeld and Larry David are not ones to shy away from blatant & self-deprecating jokes about Judaism. In fact, their subversive and approach to dark humor in this realm tends to find honest purpose.

In one of its most referenced episodes, Seinfeld features a power-mad owner of a soup restaurant who forces his customers to silently wait in line, following his strict rules to attain their meals–one false move and they are denied any of his delicious soup.

There is a place and time for most humor, and for 2020, “The Soup Nazi” has not aged well. There is some tongue-in-cheek comedy comparing a store owner to an infamous dictator, but with the rising media converge of neo-nazi and other extremist groups, this popular dark humor joke is much poorer in taste than any soup. 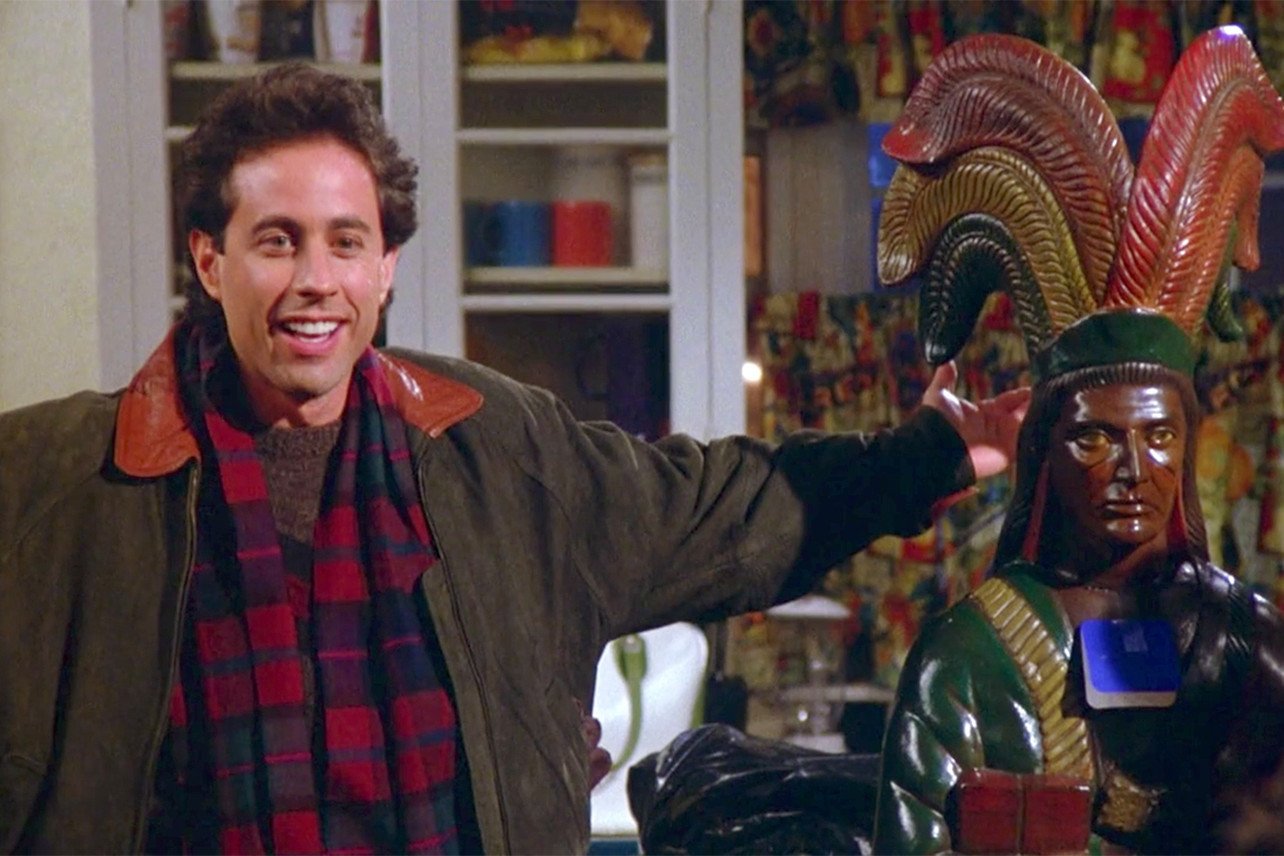 “The Cigar Store Indian” episode of Seinfeld is memorable for all the wrong reasons. Famous for its inappropriate jokes about race–particularly toward indigenous peoples–Jerry Seinfeld lands in hot water with an insensitive case of poor timing and misunderstanding.

Outside a cigar shop, Jerry is seen playing with a stereotypical statue portraying an indigenous person and making “whooping” calls by his current girlfriend, Winona (Kimberly Guerrero). In an effort to rectify his actions, Jerry buys the statue as a gift to Winona, innocently unaware of her indigenous heritage.

Adding to other insensitive comments Winona witnesses from Jerry, he eventually slips and calls Winona an “Indian-giver.” Such dark jokes–even when regarded as unintentional–contribute dangerous stereotypes and marginalization of ethnic groups that have aged poorly in series’ like Seinfeld to its current audiences. 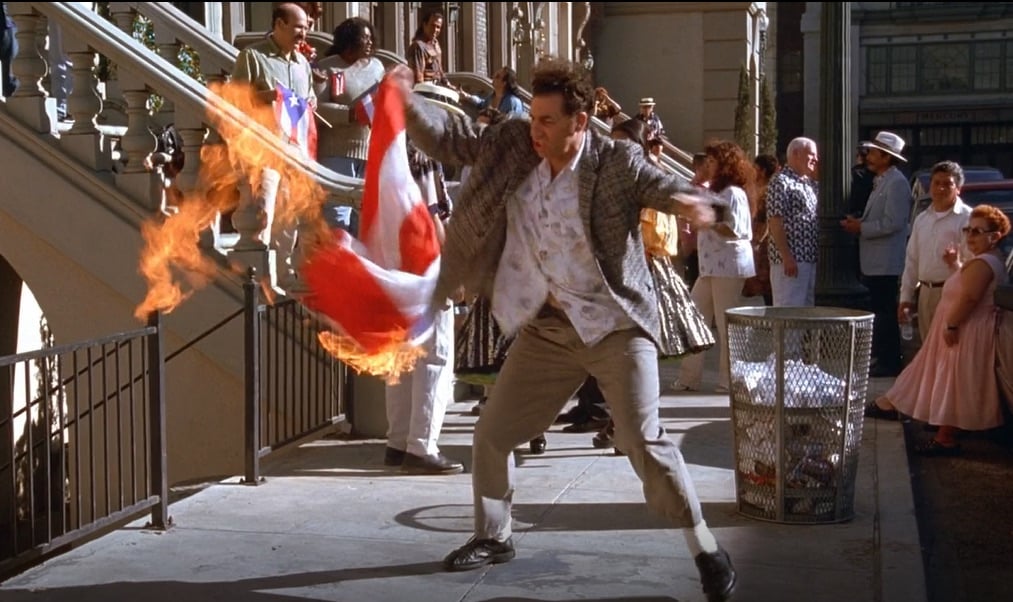 Season 9 Episode 20 of Seinfeld was plagued with accusations of insensitivity when it first aired in 1998. The episode titled “The Puerto Rican Day” shows the cast stranded in their cars amidst a city-wide traffic jam caused by a Puerto Rican Day parade.

When Kramer leaves Jerry’s car to hunt for a restroom, he causes quite a stir by accidentally setting a Puerto Rican flag on fire with a sparkler. Kramer is then chased by an angry group of parade-goers. When the group appears to surround Kramer, Jerry, and their car, Kramer jokes: “it’s like this every day in Puerto Rico.”

The episode sparked backlash when the president of the National Puerto Rican Coalition denounced its depiction of Puerto Ricans and the “unconscionable” burning of their flag. In light of current events and the recognition of Puerto Rico, this Seinfeld joke–unlike a fine wine–has aged poorly over the last two decades. 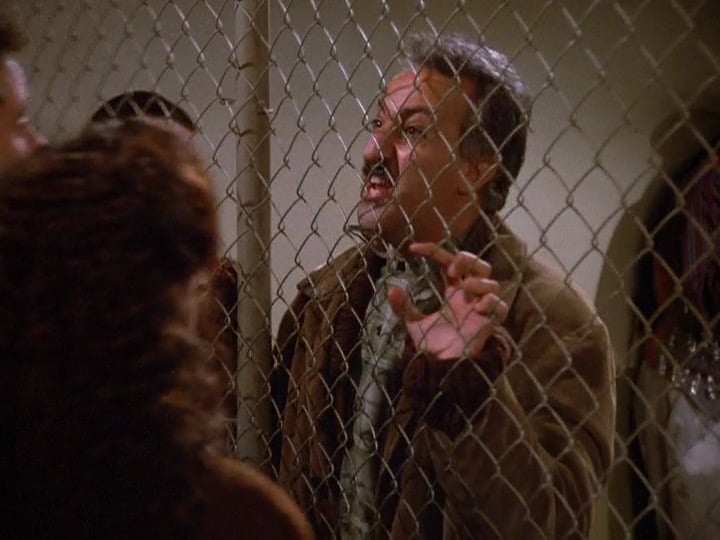 In a joke that still comes off equal parts dark and cringy, Jerry accidentally contributes to the deportation of a recurring character in the shocking episode, “The Visa.”

Seinfeld fans were first introduced to Pakistani immigrant Babou Bhatt (Brian George) and his small cafe in the show’s previous season. Babou was given poor business advice by Jerry, and was subsequently encouraged to move into Jerry’s apartment building.

When Babou’s visa renewal form is found amongst old, unchecked mail delivered to Jerry by mistake, he is taken to jail by the INS. Jerry promises to redeem the mistake and help Babou go free–sounds innocent enough for Seinfeld, right? 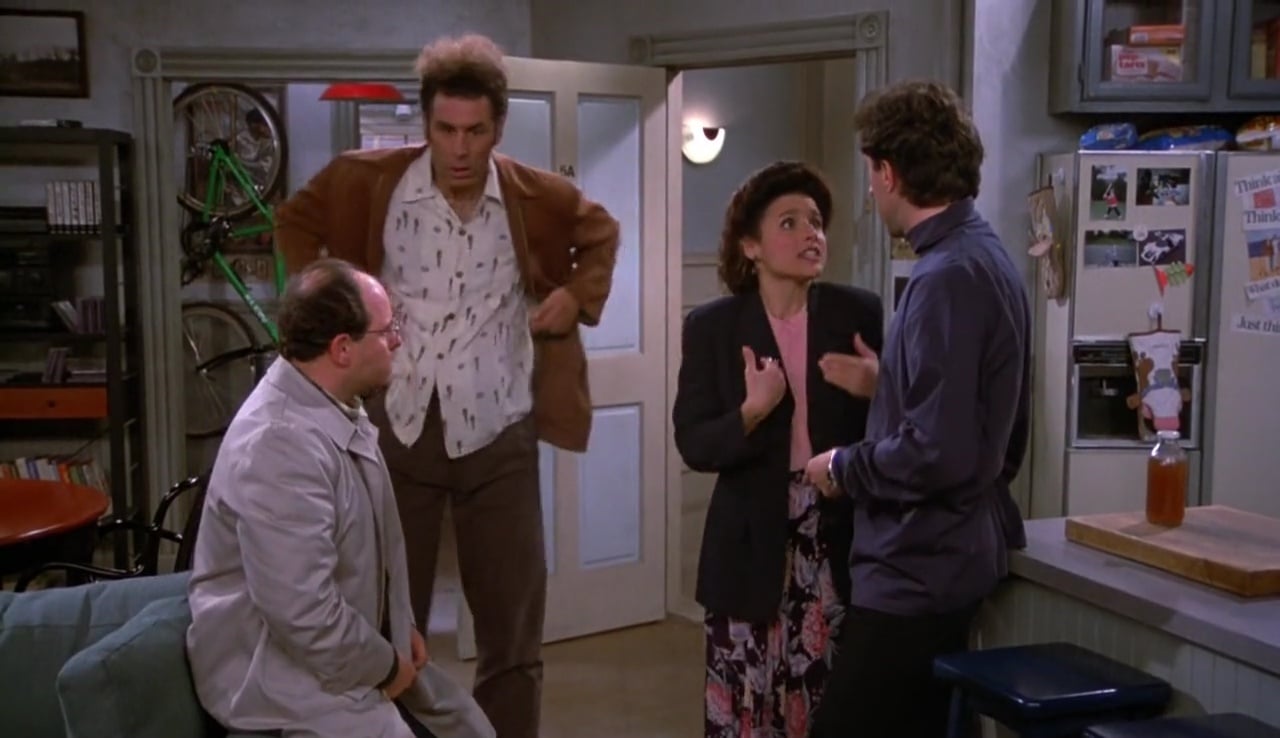 But the dark joke behind this episode is that Jerry becomes so entangled in a subplot involving one of George’s love interests, that he forgets not only his promise to Babou, but the entire conflict altogether.

Babou is deported back to Pakistan and vows revenge on Jerry Seinfeld. Trust us–there is nothing funny and everything dark about an immigrant being dragged away from his business and family. 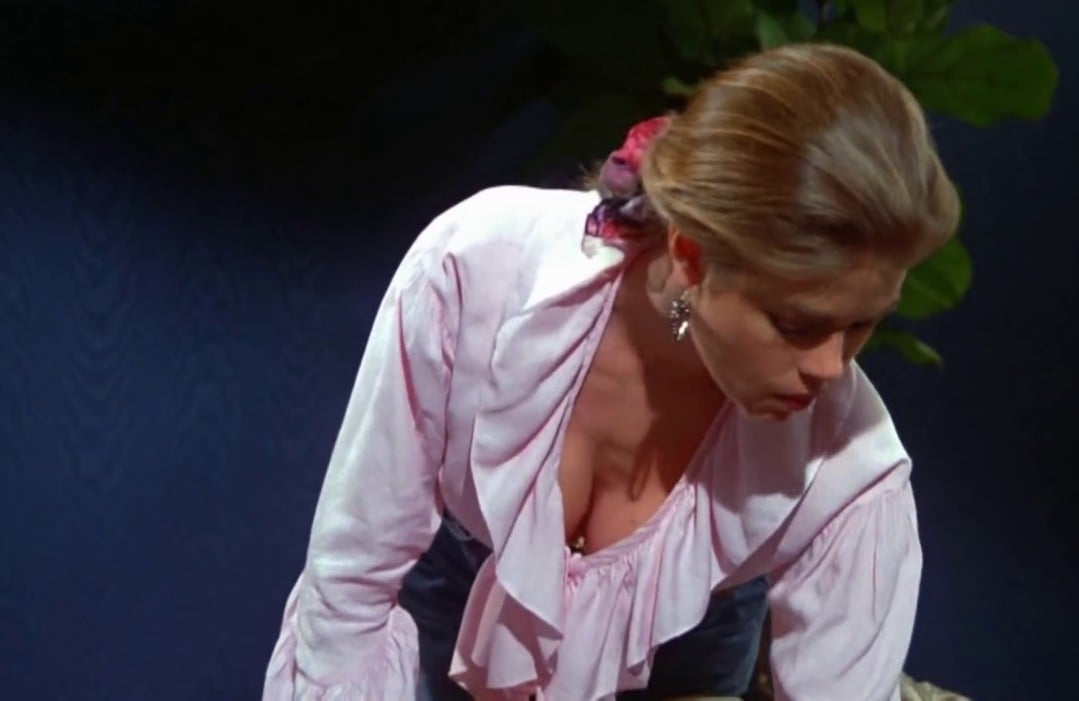 Seinfeld dark humor: “The Shoes” and the breasts

In the midst of a Seinfeld Season 4 plot arc, an episode titled “The Shoes” follows Jerry and George to the office of an NBC executive (Bob Balaban) who is keen on helping the pair get a sitcom produced for television.

While in the waiting room, Jerry notices the cleavage of a girl (Denise Richards) who appears suspiciously young, and nudges George to alert him of the sight. George gawks for an inappropriate amount of time and is caught by the executive, who is infuriated after revealing the girl is his daughter. 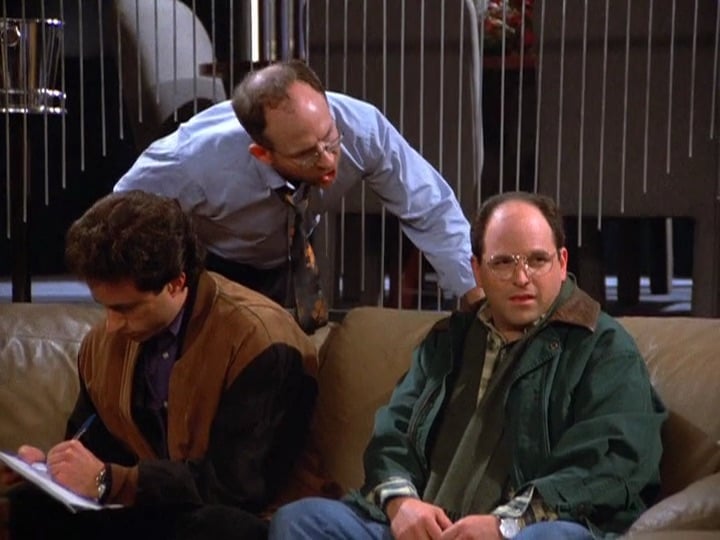 By the end of the Seinfeld episode, George and Jerry set up the executive with the help of Elaine, whose low neckline catches the executive’s attention–he concedes it’s an unavoidable impulse. George and Jerry are forgiven for having proven, falsely, that men are unable to control their urges.

Two aging men staring at the cleavage of a young teenager is creepy enough, but trying to reinforce their behavior with objectification of the female body and perpetuating theories of uncontrollable masculinity has aged terribly in the world of dark humor jokes. 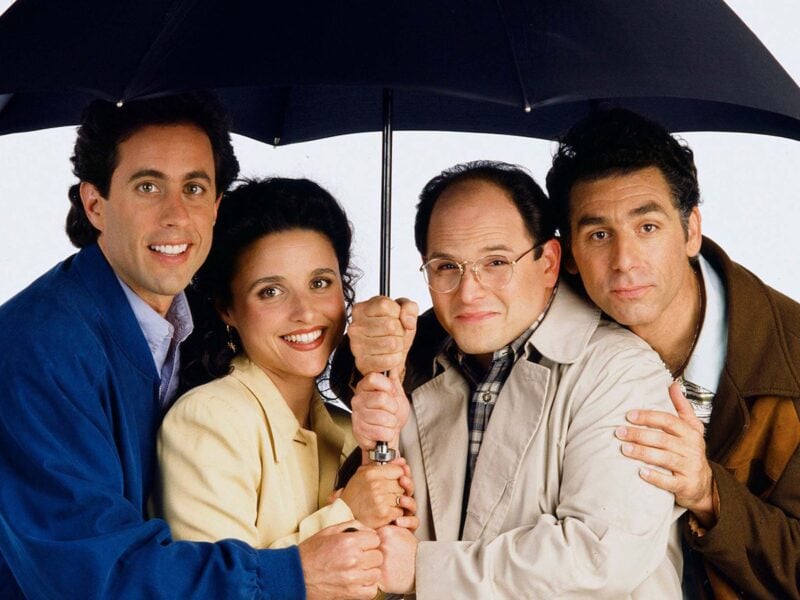 ‘Seinfeld’ heads to Netflix: Which episodes are the best? 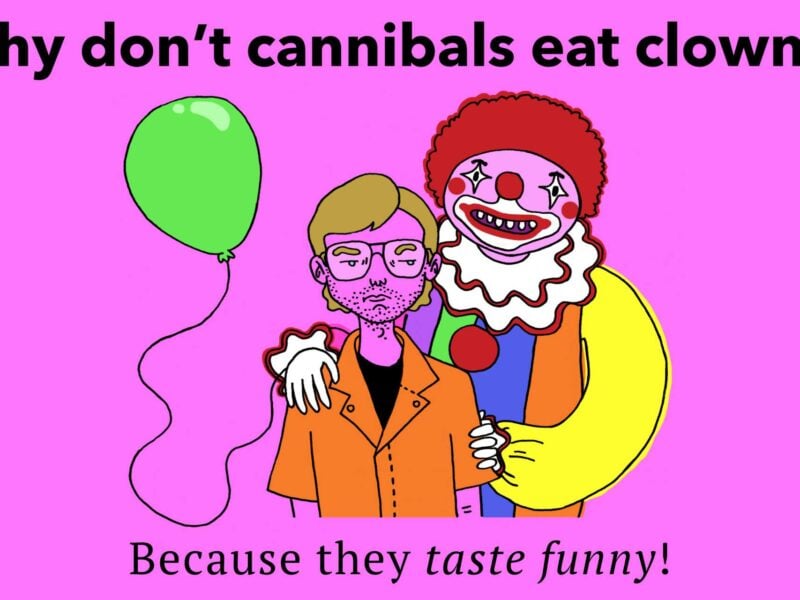