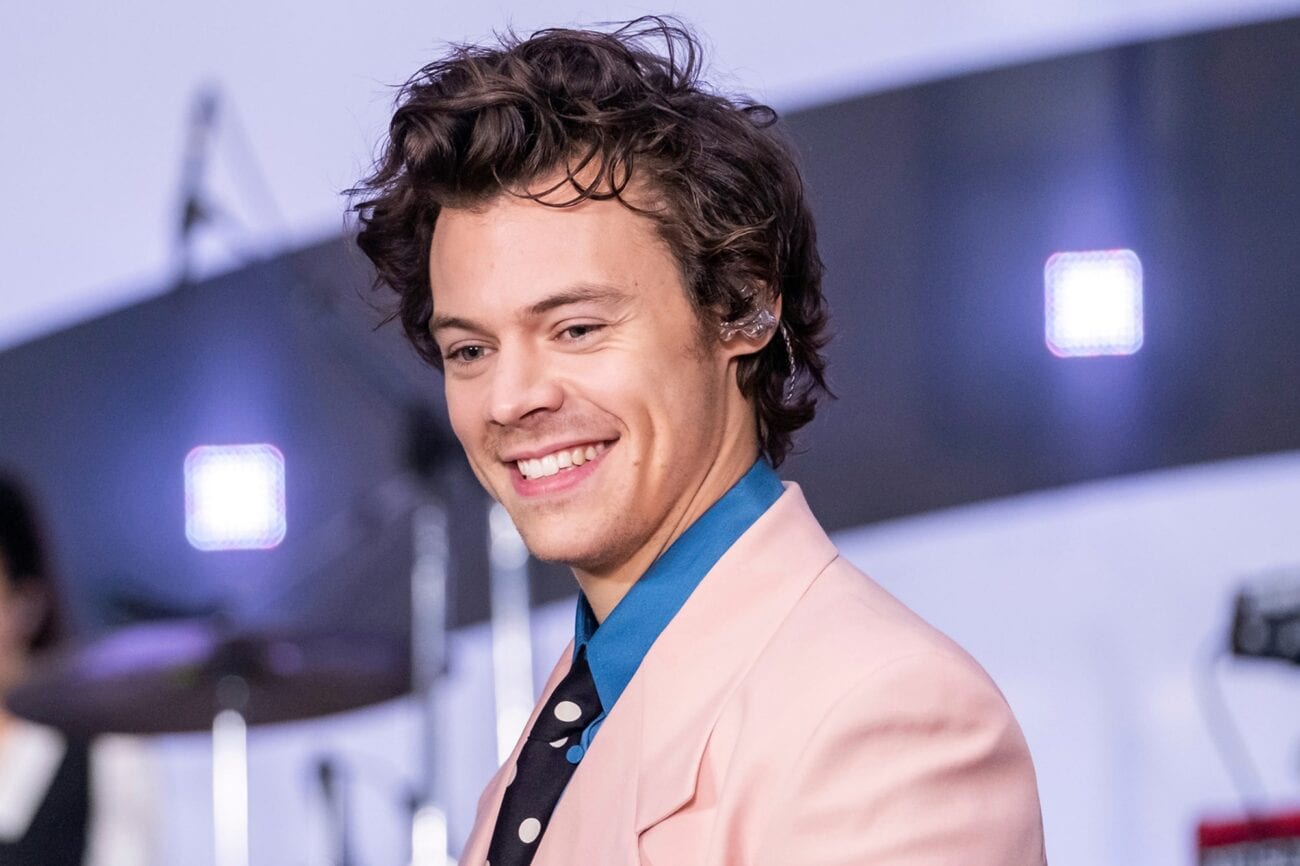 Did Harry Styles end 2020 by dating Olivia Wilde? Dive into the rumors

Hear those wedding bells? Harry Styles & Olivia Wilde have just been spotted at a wedding together and we can only focus on this new alleged couple. Multiple sources have captured the Hollywood stars together but what do we know about these images – are they really an item?

According to ET, Harry Styles & Olivia Wilde were caught holding hands and One Directioners want to know more. The flirty pair went to a wedding together in Montecito, California and Styles was even captured in a white bathrobe standing between the happy newlyweds Jeffrey Azoff & Glenne Christiaansen.

The duo were wearing masks & holding hands in the recent wedding snapshots taken by Page Six. Olivia Wilde & Harry Styles were walking side by side to the San Ysidro Ranch in Montecito, California to attend Styles’s manager Jeffrey Azoff’s wedding. The duo looked very chic as they drove into the venue with Styles’s vintage convertible – all eyes were on them. 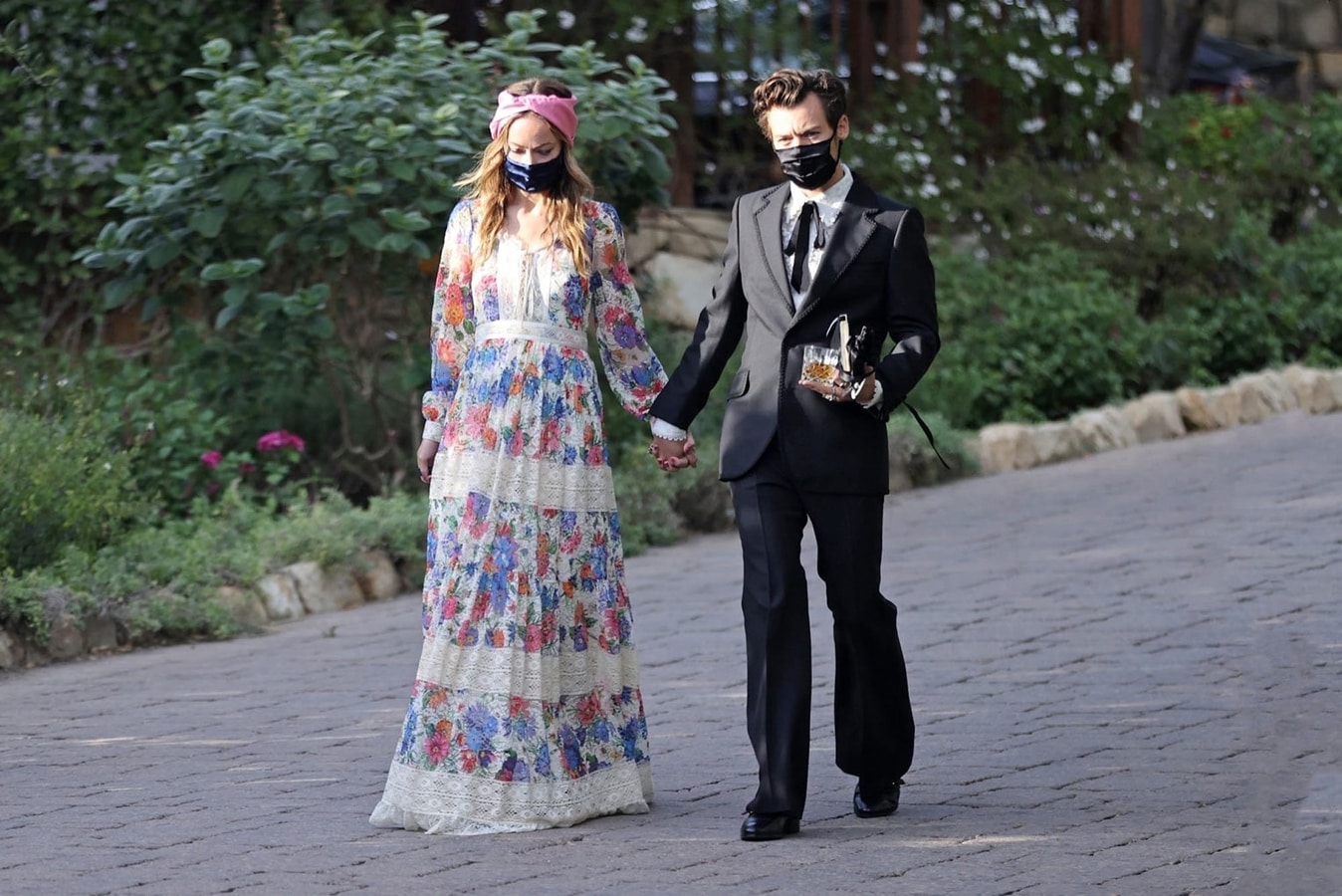 According to Page Six, fans believed the duo could have fallen for each other while on set of Olivia Wilde’s recent thriller Don’t Worry Darling. The American psychological thriller is directed by, produced by, and features Olivia Wilde alongside the lead Harry Styles as Jack.

Olivia Wilde told Vogue that she decided to cast Harry Styles as the lead of Don’t Worry Darling after seeing the “Watermelon Sugar” singer in the war film Dunkirk. Wilde expressed that she “did a little victory dance” when Styles signed on to the project. 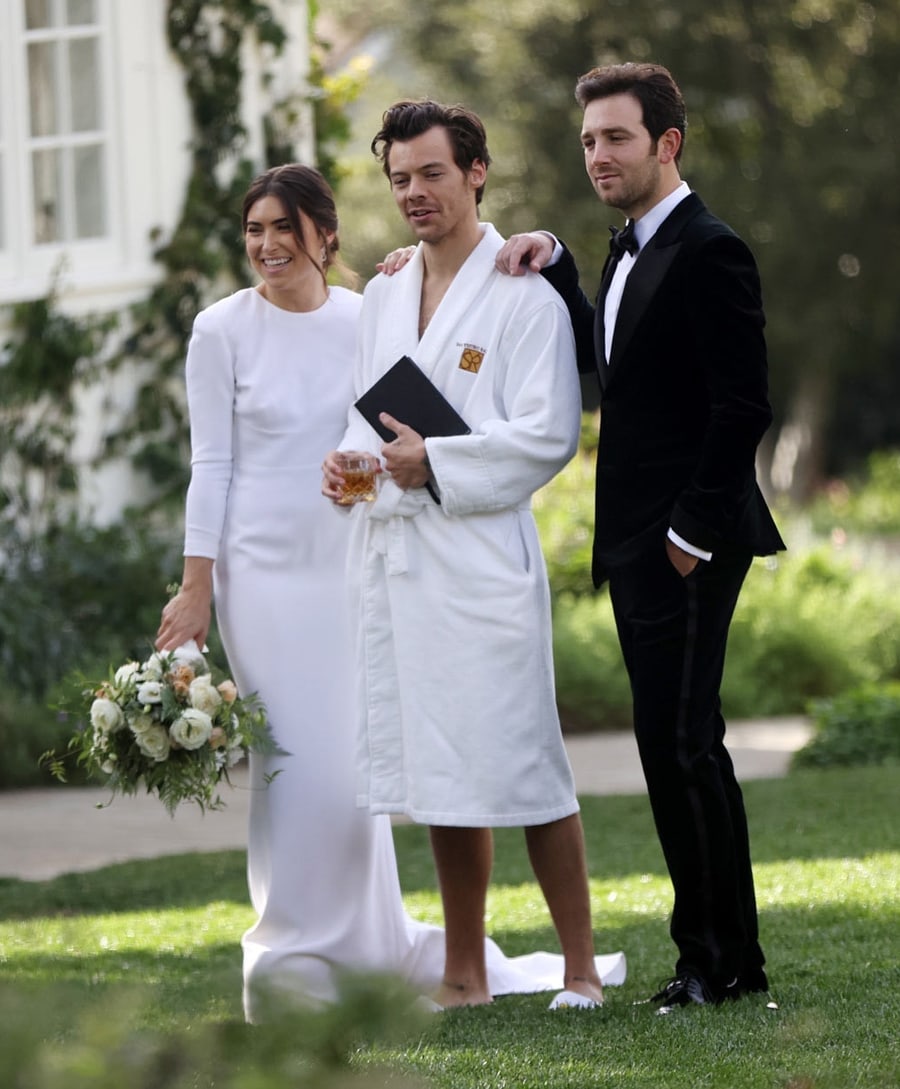 In Olvia Wilde’s interview with Vogue, she explained: “To me, he’s (Harry Styles) very modern and I hope that this brand of confidence as a male that Harry has – truly devoid of any traces of toxic masculinity – is indicative of his generation and therefore the future of the world.”

Wilde continued to praise the singer stating: “it’s pretty powerful and kind of extraordinary to see someone in his position redefining what it can mean to be a man with confidence.” 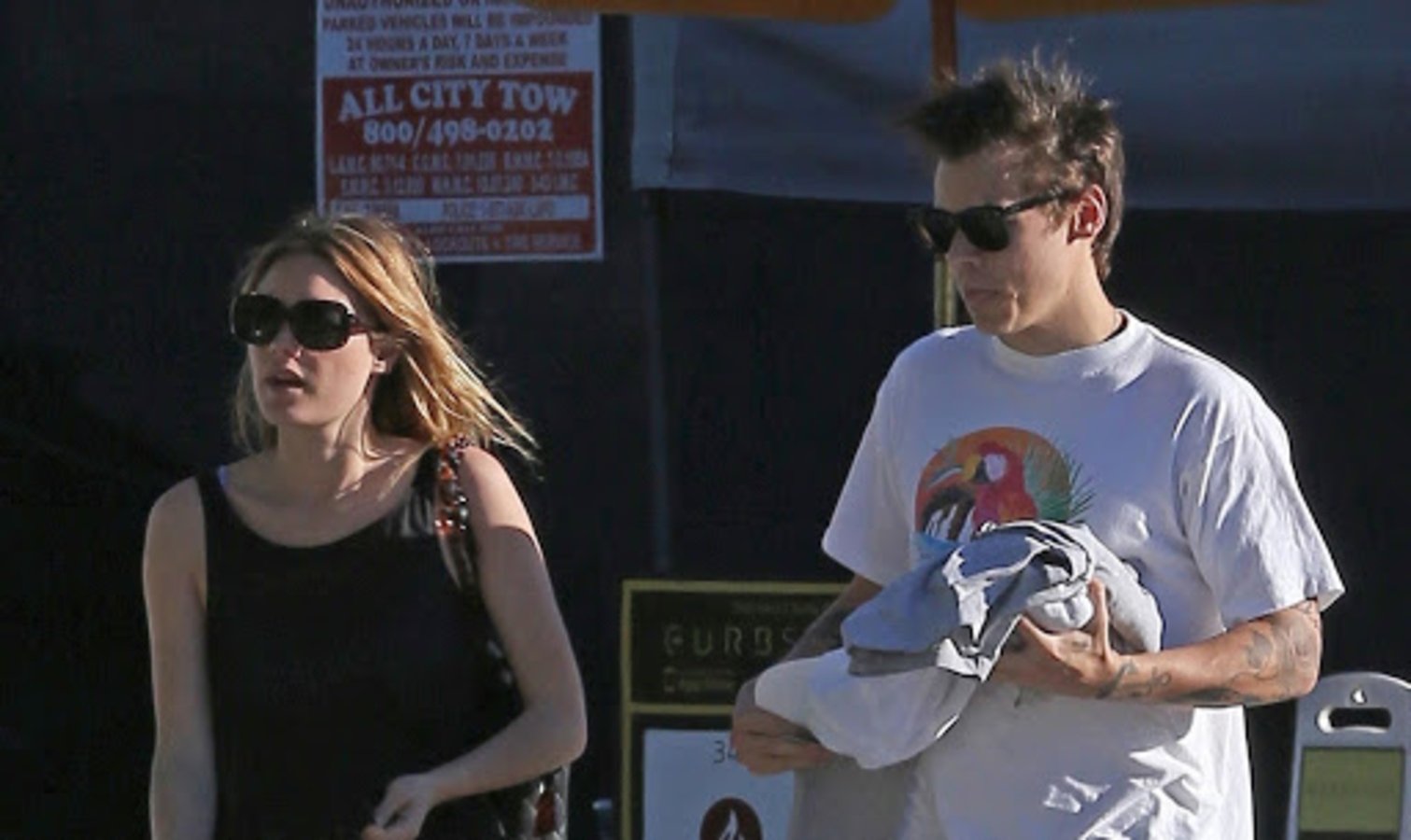 A source told US Weekly in December 2020 that Harry Styles’s “dating life has been pretty nonexistent during lockdown because he’s been so careful to respect quarantining rules and social distancing”. Right now, the former One Direction member is quarantining with his roommates in Los Angeles.

Elite Daily reported that Harry Styles is “keeping his options open” – he’s not looking for a relationship but is definitely “interested in meeting new people”. His last public relationship ended in July 2018 with former girlfriend Camilla Rowe who is also featured at the end of his latest song “Cherry”.

Although Styles previously claimed he’s in “in no hurry at all” to settle down, could Olivia Wilde be the new person he has been waiting for? 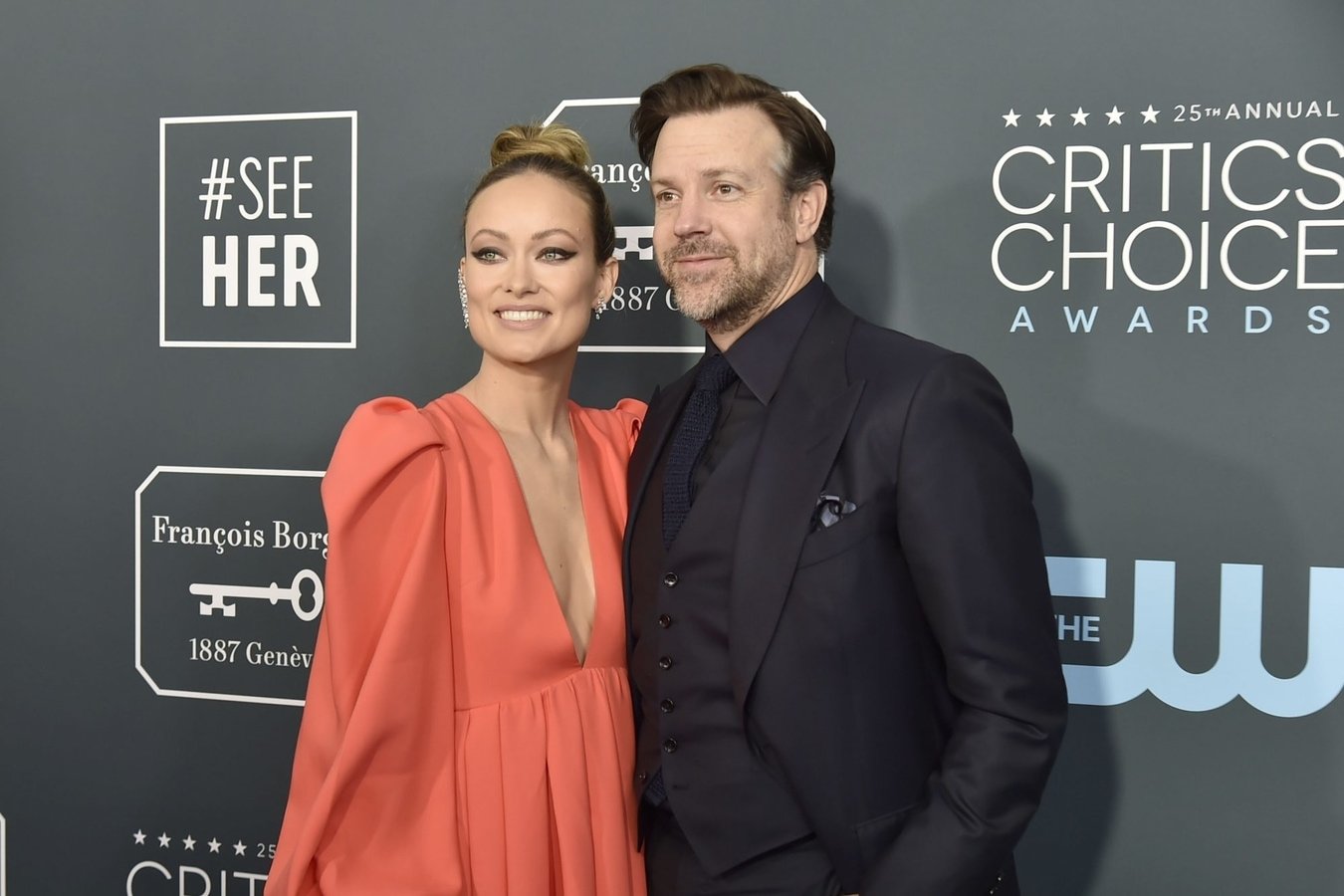 In November 2020, a source told ET that Olivia Wilde & Jason Sudeikis had called off their engagement. The comedian & Wilde were together for over nine years and have two children together; Otis (their six-year-old son) & Daisy (their four-year-old daughter).

The source told ET that “there was absolutely no drama or scandal, they just didn’t work as a couple anymore” and “they adore each other and have nothing but the utmost respect for one another”.

Harry Styles & Olivia Wilde may have travelled together to and from the California wedding, but is it something more? Let us know in the comments if you think this is the start of a beautiful relationship!

Can I Watch ‘Don’t Worry Darling’ (Free) Online Streaming at Home? Here’s How