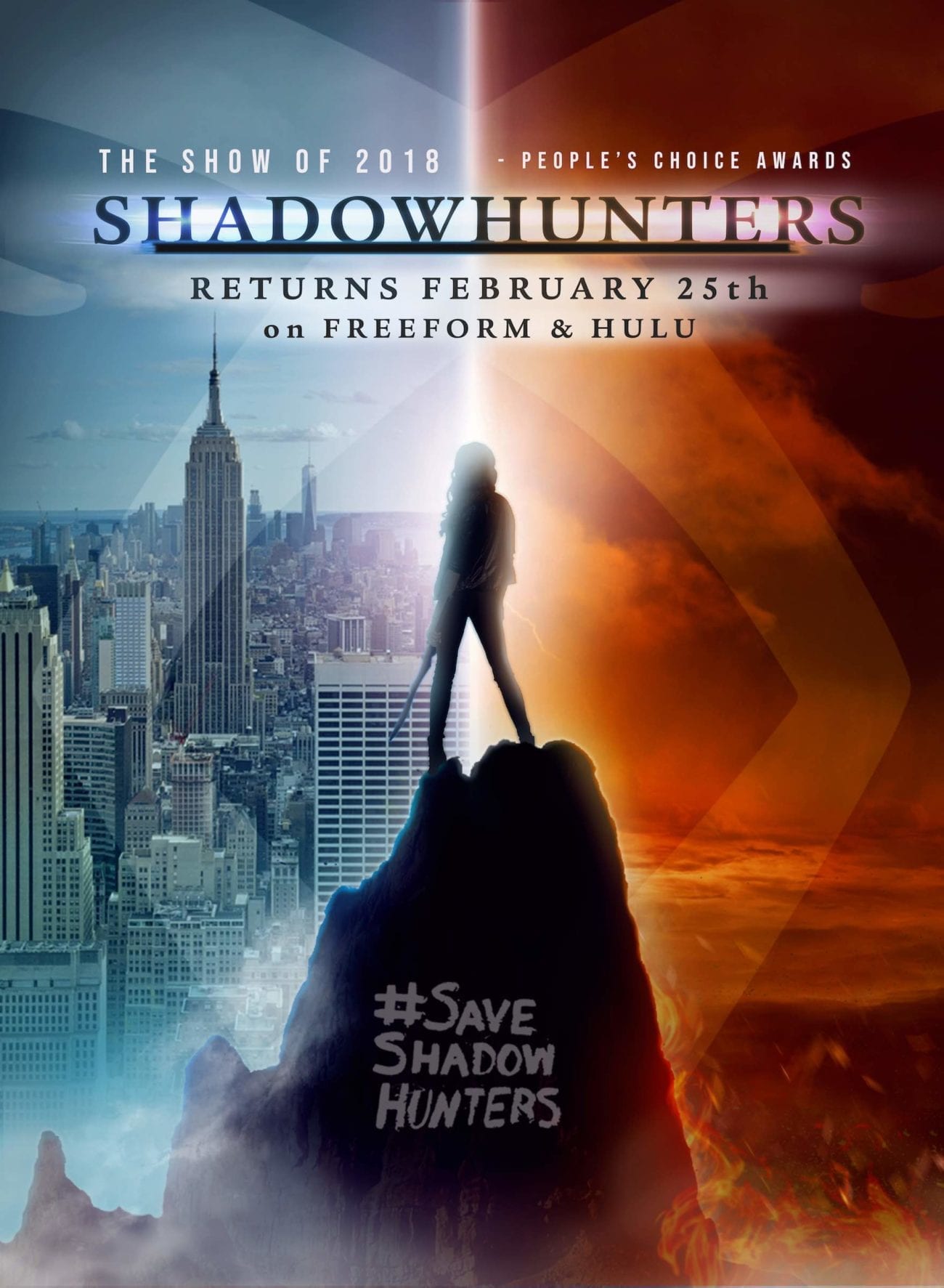 Today is our final Shadowhunters season 3b countdown reveal from Boom Bitches SH. We’re passing on our editorial baton to the leaders of Boom Bitches SH, who have told us passionately why we all need to keep fighting to #SaveShadowhunters:

If you’re someone who regularly reads Film Daily, watches television award shows, or enjoys spending time on Tumblr, you may have found yourself coming across a small TV show called Shadowhunters. Maybe you already watch the show. Maybe you’ve never given it a second thought.

If you’re a Twitter user, you may have come across the #SaveShadowhunters campaign. Maybe you’re a fan of Jimmy Fallon or Supernatural, and suddenly your normal timeline scrolling was interrupted by hundreds of gifs and a desperate cry to “save our show!” on tweets that have nothing to do with Shadowhunters.

The reason is that for the last 8 months, we Shadowhunters fans have been desperately trying to save our show, cancelled on June 5th, 2018 for “economic reasons”. And while you can fault us for many things – not following proper online etiquette, aggressively invading every hashtag we could, annoying the ever-loving hell out of every customer service rep working for Netflix and Freeform – one thing you cannot fault us on is our passion.

Thousands of us have been asking why our favorite show was cancelled: according to the still ongoing Change.org petition, 165,366 fans (at time of writing) to be exact. The petition, entitled “Anyone who this show has saved – SAVE SHADOWHUNTERS”, has been the fandom’s battle cry from the very beginning. Eight months ago, none of us could predict the crazy journey we were about to embark on.

So what is it about Shadowhunters that inspires such stubborn loyalty? At first glance, the show possesses all the hallmarks of any other fantasy YA show, following in the footsteps of Buffy the Vampire Slayer and Teen Wolf, and sits comfortably alongside cinematic sisters like The Hunger Games and Divergent: young girl discovers she’s part of an extraordinary fantasy world, meets cute boy in the process, makes friends, slays demons, and comes of age.

What inspired such passion from the self-coined ShadowFam is a little more universal, however.

Shadowhunters has diverse characters and equally diverse casting, with LGBTQIA+ representation that secured it a GLAAD award for Outstanding Drama Series in 2017 and a nomination in 2018 & 2019 (yet to be awarded).

The show has nuanced, strong female characters, heroes who aren’t sidelined for their male counterparts. Meanwhile the male characters can be emotionally vulnerable, seek comfort from other people, talk about their mental health, then go out and save the day. Shadowhunters emphasizes the importance of family, found and otherwise, in an atmosphere of love always winning.

For many of us, Shadowhunters was a life-changing show that represented without stereotypes. Testimonies on The Trevor Project fundraiser are both inspirational and heartbreaking. In this digital age when streaming TV can be viewed almost anywhere, Shadowhunters has reached communities where it is still a dangerous place to be out and proud.

The openly bisexual character Magnus Bane, and Alec Lightwood, whose coming-out story occupies much of the first season, have given many fans the strength to be honest about who they are.

Shadowhunters is an important show that has changed the lives of so many. Clary Fray taught us love makes you stronger; Maryse Lightwood encouraged us not to give up on love but fight for it. Alec Lightwood reminded us “impossible” just means try again. And Simon Lewis taught us whatever you do, don’t lose hope.

The two billboards that went live today in Los Angeles, designed by our very own @IconicNephilim, are just the latest in a long line of fan-funded projects to save the show. They will be followed by a 5-day bike billboard advertising campaign in the direct leadup to February 25th (the Shadowhunters season 3b premiere air date, in case you didn’t know), handing out flyers in public hotspots across Los Angeles, telling people about the #SaveShadowhunters campaign, and recommending they tune in.

After a gruelling eight-month fight to save this show and being ignored at best, ridiculed by the show’s own network at worst, the ShadowFam decided to take it into our own hands to promote the show the way it deserves. Maybe airing these last twelve episodes is all that’s been standing in the way of another network being able to swoop in and save the show; maybe it isn’t.

All we can do is watch the episodes and enjoy them, then tweet about them until our fingers bleed, then watch them again, and make sure as many people as possible do the same! Whatever happens, we don’t think people are going to forget the hell we’ve raised and the kindness we’ve spread in the fight to #SaveShadowhunters. That’s a legacy no one can take away from us.

We’ve done everything in our power to make ourselves heard, to prove that this show matters, to get new viewers hooked. The only thing left now is to watch the last dozen episodes on the day of release, get viewing numbers as high as possible, and discuss every detail at great length on social media.

Create fanart. Write fan fiction. Listen to podcasts. Tweet alongside the cast & crew while the episodes are airing and boost social media engagement.

Our job now is to make sure everyone knows how much we love and value this show with every single episode that airs.

Will you join us?

Watch Shadowhunters every Monday on Freeform from February 25th and every Tuesday on Hulu & Netflix (International). Join the global campaign to #SaveShadowhunters now!