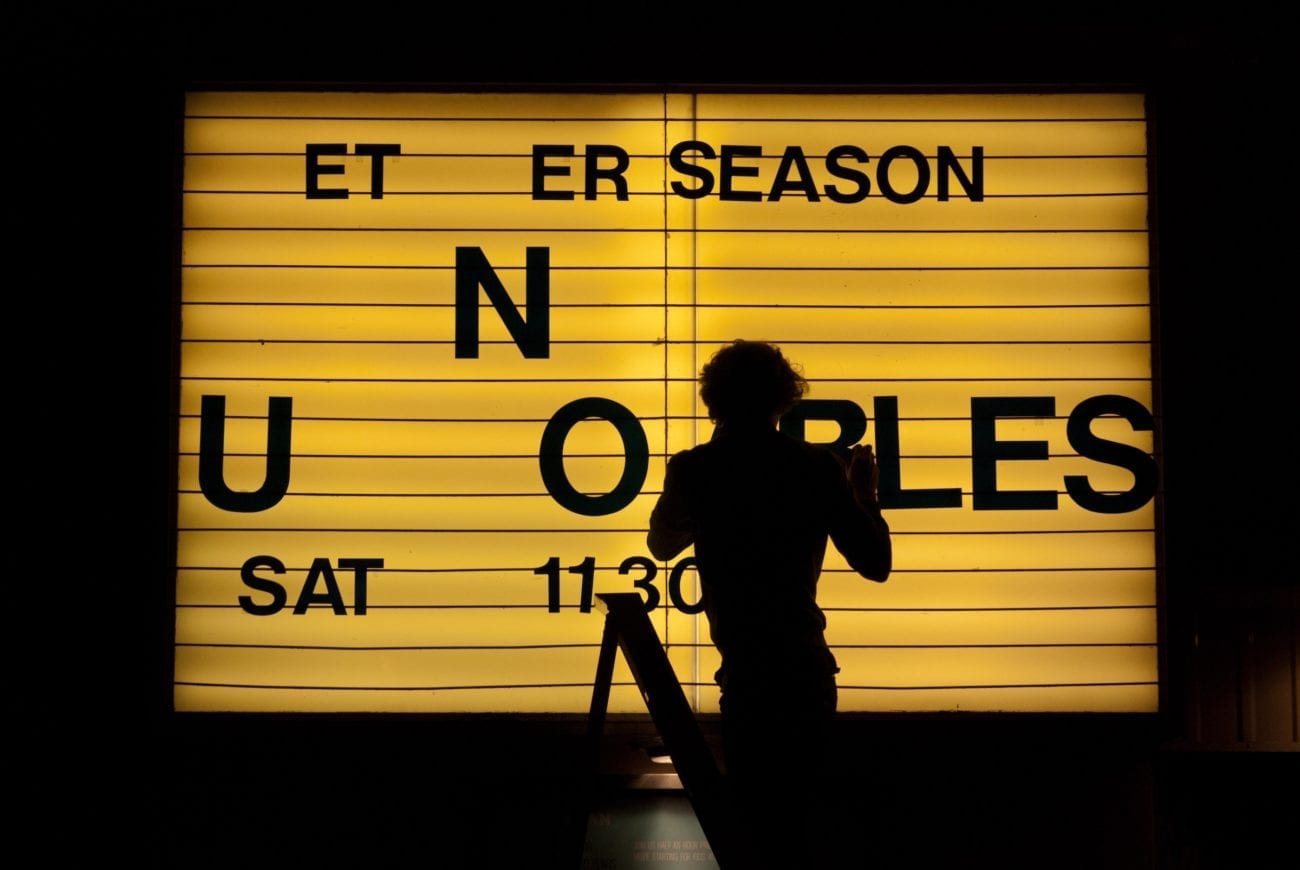 October is almost upon us, and for those of us in the Northern hemisphere that means packing away our outdoor screenings and huddling inside a packed cinema with a pumpkin-spiced latte and several layers of sweaters.

Halloween is drawing ever closer, and film fests around the world are stocking up on horror films, slashers, and trashy B-movies to scare away the cold. But if you scare too easily for horror fests, there are plenty of prestigious, up-and-coming indie festivals to satisfy your film cravings.

MANHATTAN SHORT has to be one of the most epic film festivals on the circuit, the only film festival we know of that screens its finalists over six continents. Its 21st Annual Short Film Festival is exceptionally impressive, taking place in over 350 venues between September 27th and October 7th, 2018.

If you’re one of the lucky nine finalists, not only will your movie be screened over 300 times, you’ll also automatically be Oscar-qualified. The Best Film and Best Actor awards are determined by audience choice at the events. This festival is high on our list of those to enter.

Seven-year-old Marina Del Rey Film Festival is a beloved indie festival in the scenic waterside town on the westside of Los Angeles (a.k.a. Silicon Beach). The festival screens films of every genre, on any topic, from every country around the world, from features to shorts. Its mission is to promote the spirit of filmmaking and indie film in Marina Del Rey and Los Angeles; it even has a coveted 5/5 rating over on FilmFreeway.

AltFest is New York’s only LGBTQ film festival programmed exclusively by locals. Screening at NYC’s prestigious Anthology Film Archives, they hold screenings year round, as well as an annual Pride Month festival. Each year they award their PATHFINDER award to a young filmmaker who “blazed the trail for a younger generation of Gay and Lesbian filmmakers.”

NoBudge aims to grant emerging indie talents the space they need to thrive outside the ruthless world of industry connections and budgetary restraints. Described by No Film School as “one of the premier destinations for true independent movies”, it’s one of the only true safe havens for innovative artists working outside the studio system.

The Psychedelic Film and Music Festival

This festival celebrates the fever dreams, the abstract thoughts, and the expanded, altered states of consciousness you feel watching history’s strangest and most striking films. It draws from features, shorts, documentaries, and live performances that celebrate psychedelia. This year even features a live performance from Simon Boswell, famed composer who has worked for surrealist directors such as Alejandro Jodorowsky and Dario Argento.

This horror festival created by fans, for fans attracts entries from across the globe. The winning films are shown in all their blood-drenched glory on the big screen in Winchester’s Alamo Drafthouse Theatre. If you crave a frightful challenge, the festival team will even send you a random prop to use in your film. It’s an absolute must for amateur scarers.

Presented by the sultry and sinister Lady Belladonna, this festival competition showcases all varieties of horror shorts. From the chilling to the campy, if your entry impresses, you could be in for a chance to win $500. Not only that, but the film will be featured in Lady Belladonna: The Movie, a hellish anthology hosted by the “Mistress of Iniquity” herself.

This homegrown festival in the heart of DC, run by local, committed volunteers, will show 13 features and short films under the theme “Threads of Resilience” for its eighth year. Feature free embroidery and painting workshops, stand-up comedy, and an artist spotlight on Palestinian actor Saleh Bakri.

BIBFF is a nonprofit festival that strives for education and enrichment in their featured films. Partnering with the LGBTQ community of Baltimore, the festival’s films aim to present unique and underrepresented experiences on its big screen in the historic Charles Theater. This year showcases the talent of Japanese director Takeshi Fukanaga and his film Out of My Hand about a Liberian plantation worker who seeks a better life as a cab driver.

Not only granting a voice to novice filmmakers, this festival aims to use its competition to spread awareness of a number of issues, primarily domestic violence. Winners will see their short advertisement aired on Connecticut television. It also showcases student films on the topics of Black Lives Matter, LGBTQ Rights, and the MeToo movement.

For five years, Champaign’s local Art Theater has been running horror-themed events throughout the month of October and has now expanded its programming into a fully-fledged genre festival. The short films will run throughout the day, as well as being screened before classic horror films in the runup to Halloween.

Love short films but hate leaving the house? Here’s a festival whose  benefits you can reap from the comfort of your own home! Spirit Film Festival is not just a lecture on spirituality and religion. Instead, filmmakers aim to inspire with uplifting stories, documentaries, and animations about human spirit, our connections to each other and nature, as well as holidays, spiritual traditions, and the afterlife. Expect an eye-opening day of streaming.

This sprawling media festival is Los Angeles’s premier outlet for upcoming Latinx content. As well as screenings of short films, TV pilots, and documentaries, the festival also invites you to get involved, with numerous workshops and masterclasses scheduled throughout the three-day event.

If you find yourself on holiday in South America this October, take a break from the beautiful scenery and enlightening culture to experience some gorgeously presented world cinema “projected on walls that have centuries of culture”. You’ll be safe knowing you’re still enjoying the authentic Peruvian experience, even during a day at the movies.

This quirky film festival is all about the unusual and the unexpected. Drawing from talented filmmakers from all walks of life, it showcases seeds of talent from high school students all the way to established cinematic pros. Since 2008, SCFF has partnered with the EarthVision International Environmental Film Festival, bringing almost 70 environmental films to raise awareness of humanity’s destructive impact on the planet.

Don’t let the French put you off – you’ll find none of the stuffiness of the Cannes Film Festival here. Instead, this Canadian celebration of all things film is all about looking ahead at cinema’s future, frequently presenting new innovations in 3D, VOD, and more recently virtual reality. With huge names like David Lynch, Jane Campion, and Denis Villeneuve stopping by in the festival’s history, you can be certain that each year has something new & exciting in store.

An unashamedly geeky, diverse, and vibrant film festival showcasing California’s multiple student talents. The program itself is described as an “Oscar-esque” event, complete with comedic hosts, costumes, skits, and gags, ending with a red carpet awards ceremony for the lucky winners.

A local grassroots organization that prides itself in celebrating local talent from the Highland Park area of Los Angeles, this group of amateur filmmakers run the three-day festival event and also dedicate their time to bringing film education to schools with their mentorship program.

Atlanta’s primary faith-based film festival is now celebrating its 10th year of inspiring young filmmakers and cinema fans with Christian films. This anniversary year will include over 100 films as well as workshops and panels featuring industry experts.

Laughlin is what you get when you combine the indie movie festival with all the luxury of America’s biggest parties located just south of Las Vegas. Guests and filmmakers will be treated with casinos, bars, and hotels aplenty. The festival also boasts nightly parties, as well as various panels and workshops to attend if you’re not too hungover.

This homegrown festival proudly declares itself as “a respite from the market and industry of film festivals”. A purely independent celebration of independent movies, the festival takes a particular interest in cultivating Missoula’s flourishing local talent. With intriguing titles such as My Ex-Girlfriend is a Shovel, and Hair Wolf, you’re bound to find something to fascinate you in its unique collection of shorts.

No city represents the movies quite like New York. While these days you’re more likely to see Spider-Man swinging through Times Square on the big screen, don’t forget to pay your respects to the city that’s also the home of several influential indie auteurs. If you prefer Taxi Driver to The Avengers, the Ocktober Film Festival might be the home for you as it takes pleasure in boosting the careers of local & independent new talents.

Film and dance have always gone hand in hand, with cameras catching some of the most exquisite forms of bodily expression in film’s history. The Outlet Dance Project aims to continue that tradition. Running for fourteen years, it blends stage performance and experimental film to create a vibrant creative space for female dancers & filmmakers. Its October program includes both a film showcase as well as a “Day of Dance” packed with live shows.

San Pedro is an idyllic port district hidden along the coastline of Los Angeles, the perfect location to mix some cocktails, put your feet up, and enjoy dose of independent cinema. This festival hopes to put San Pedro on the map as one of LA’s cultural highlights, with a particular emphasis on “youth in film”. As well as encouraging California’s youngsters to enjoy indie cinema, the project also provides access to workshops, loans, and camera equipment to budding filmmakers.

If you’re a genre movie fan in LA, your first stop this October should be Shriekfest. Set up to celebrate horror, sci-fi, and thrillers, it’s a glorious tribute to anything that makes your skin crawl. Previous winners have featured films starring Linda Hamilton (The Terminator) and Danielle Panabaker (The Flash), so your genre addiction is in safe hands here.

SVAFF is bringing the African story back to the African people. The festival was founded in response to the continent’s population still being exploited and misrepresented even after 50 years of post-colonial freedom. Rather than relying on second-hand sources to tell their stories, this festival encourages burgeoning African talents to share their own narratives and creativity through their own distinct and beautifully unique lens.